Our guest is Dr Henry Fisher, policy director at the UK-based drug policy think tank, VolteFace. Henry and the team at VolteFace are hoping to make positive changes to current UK drug policy by getting people outside the drug reform community involved in the debate. Politicians are much more likely to listen to patient groups, economic think tanks or doctors than people in the drug reform community: and this is how VolteFace hope to change the face of drug policy in the UK. 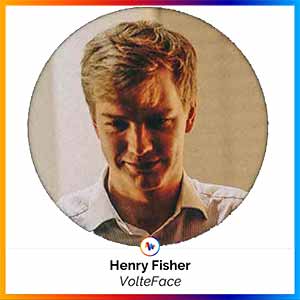 VolteFace means something along the lines of ‘a total change in opinion’. This is the mission of VolteFace; they want to reach people who have either never thought about drug policy, or have an entrenched view, and change their minds. VolteFace wants to adopt a pragmatic approach to drug policy, by making actual change rather than relying in idealistic notions that never end up getting anywhere.

VolteFace’s first big policy report was Tide Effect, which focused on how cannabis regulation was working in countries and states where it has been legalised. VolteFace teamed up with the Adam Smith Institute, a neoliberal think tank, to produce this document. By engaging with groups that otherwise wouldn’t normally address drug policy, VolteFace hopes their policy documents will be treated as more balanced and pragmatic than other drug reform groups.

Henry agrees that The Third Wave has a similar goal – attracting businesspeople and self-improvement communities to psychedelics will hopefully start to break down prejudices and change some opinions.

We know that many academics in drug policy reform can be very idealistic – producing guidelines to a perfect drug policy without including pragmatic steps to actually changing anything. Henry is familiar with the occasional idealism found in academia, having a PhD himself. Even though he hasn’t totally left his ideals behind, he made the move into drug policy reform through a desire to actually make a change. A pragmatic approach is the only way to make a difference – although it’s always important to have an ideal view of a future drug policy that works for everyone.

Cannabis regulation has set out some interesting problems; namely, how do we prevent monopolies (so called ‘big cannabis’), and how to we avoid marginalising underprivileged people? Henry points towards examples of specific states that have changed their regulations to prevent any group of companies getting an unfair grasp of the market. As for avoiding marginalisation, Henry mentions examples of states that focus on getting people with prior convictions into the legal market – it makes very little sense to take away opportunities from people who were only in the illegal market because of their desperate position in life.

The idea of cannabis legalisation in the UK is a little further in the future than it is for the US. The government there is conservative, and haven’t broken past their official standpoint of “cannabis is illegal because it’s harmful”. Henry hopes that the growing amount of research and pressure from patient groups will do something to change politician’s minds.

Finally, Henry talks about the need for people in the psychedelic community to be vocal about their drug use. Typical psychedelic users tend to be more privileged than the average drug user, so should use that advantage to try and make a difference in drug policy, and start shifting the stigma that surrounds the use of psychedelics.