Our guest on this episode of The Third Wave Podcast is Stephen Bright, co-founder of PRISM and a leading psychedelic researcher in Australia. Stephen talks to us about the problems facing the psychedelic movement in Australia, where a conservative government perpetuates a ‘Pathological Paradigm’ that rewards negative views on drugs. Stephen tells us how the future of drug policy in Australia depends on research, the media, and a shift in popular opinion. 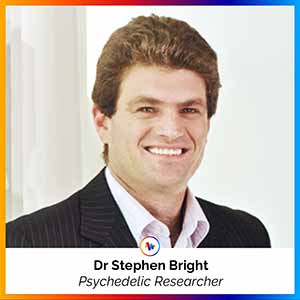 Stephen Bright is a co-founder of PRISM, a non-profit organisation in Australia that aims to begin research into MDMA as a treatment of PTSD. PRISM was formed in 2011, with support from MAPS founder Rick Doblin, but has faced many obstacles in getting an MDMA trial off the ground. Stephen presented at the recent Beyond Psychedelics conference in Prague, in a talk titled “Beyond Harm Reduction”, which was focused on the barriers facing harm reduction in Australia. PRISM has faced much more difficulty in getting a trial started than their MAPS colleagues in the US, and Stephen has even experienced the head of his University attempting to stop his research.

Stephen tells us about the conservative attitude prevalent in Australia, and how this leads to a problem known as the “Pathological Paradigm” of drug use. If you are a researcher, you will only get funding by publishing negative results on drugs. The conservative politicians in charge only like to hear theories that reaffirm their stance on prohibition; so positive news and research about drugs is just not heard.

Although the majority of the Australian public are in support of some kind of change in drug policy, no powerful politicians are brave enough to propose alternatives. Drug policy discussion in Australia is largely driven by the media: a story about drug abuse surfaces, there is a public outcry, and politicians need to be seen doing something about it. In most cases, this means that the government reacts with punitive, prohibitionist interventions, such as the recent campaign to get people to snitch on meth dealers.

Recently, Australia actually saw a breakthrough in drug policy that was driven by the media: some young children who relied on cannabis to treat their epilepsy got some attention in the media, and one of their grandparents donated a huge sum of money towards the medical cannabis campaign. The attention snowballed until even conservative commentators were on the side of medical cannabis reform. This very quickly led to legalisation of medical cannabis across Australia. Stephen says that drug policy can’t rely on these kind of brief windows of opportunity to get any further; policy-makers need to start responding to situations rather than reacting to popular news stories, which often aren’t representative of the broader situation.

Stephen talks about how anti-drug campaigns in Australia have been totally ineffective. The average young person will see their scare ads and know that the reality is not as dangerous as is being portrayed. Stephen gives us the example of the Montana Meth Project; kids exposed to the negative ‘Faces of Meth’ campaign actually believed meth was less dangerous after the campaign. In the age of the internet, kids can look up real information and find that the government often doesn’t know what they’re talking about. Stephen mentions that he often lectures to new University kids about the real facts around drugs, and how to reduce harm. He thinks it’s a shame that this kind of factual, pragmatic education is not available to a broader range of people in Australia. Instead, ineffective scare campaigns continue, without teaching kids how to minimise the harm of taking drugs.

On this podcast so far, we’ve often talked to people about their personal experiences with psychedelics. Unfortunately, this is something Stephen is unable to discuss with us, due to his position as a clinical psychologist and researcher. In Australia, he would potentially face deregistration and lose his job if he were to talk about personal drug use. He mentions one interview in Australia where he was repeatedly pestered to answer this question; he pointed out that if he admitted to drug use, the presenters would call him a hippie that was promoting psychedelics in a biased manner. But if he said he’d never taken drugs, he would be told he didn’t understand the potential adverse effects – so answering the question would never do him or his cause any good.

Stephen believes that there are very few ways you can ‘come out’ as a drug user in Australian society and not be vilified. You can come out and repent – say that you made a mistake taking drugs and will work to make up for your mistake. Otherwise, you have to have the luxury of being a celebrity. Stephen points out that people love hearing about celebs entering rehab or going on a binge, and we forgive our pop stars for using drugs as a creative tool.

Australia is also unique in that there is a cultural attitude of keeping quiet, says Stephen. The phrase “Don’t be the tall poppy” has led to a culture of ‘Tall Poppy Syndrome’, where people are afraid to speak out positively about drug use. Whereas in the US and UK there are many examples of high profile businesspeople talking about their personal drug use, or desire for reform, in Australia there is no such openness. The small population of Australia, in combination with Tall Poppy Syndrome, means that the conservative status quo is maintained by relatively silent drug users.

Stephen hopes that the younger generation may be able to change this status quo by speaking out about drug use. Nick Wallace is currently trying to establish the Australian Psychedelic Society in Melbourne, and the Melbourne chapter of the SSDP (Students for Sensible Drug Policy) have recently held a symposium that attracted lots of interest. Stephen suggests that the youth in Australia will have a harder time coming out about drug use, because they are facing a more conservative opponent (the baby boomer generation in Australia did not experience the LSD revolution like the US baby boomers did), and because they face strict repercussions in their future professional lives if they speak out.

Stephen gives us his opinion on the recent case of a man protesting the criminalization of LSD in Victoria by taking it outside the courthouse. He was recently arrested and is seeking to be seen by the High Court, so he can argue for his human rights to religious freedom. Stephen believes there is not much chance of his case being seen by the High Court, as no judge or politician wants to be the ‘Tall Poppy’ and be the focus of a negative tabloid story. Stephen also warns that this kind of protest could actually harm the psychedelic movement, by painting psychedelic enthusiasts as crazy. In a way, it might end up perpetuating the belief that psychedelic use negatively affects your mental health!

Finally, Stephen gives us his opinions on the future of drug policy in Australia. He is not too optimistic; at the moment, only 3% of Australia’s drug policy budget goes into harm reduction. It’s interesting to think that Australia was once a world leader in harm reduction, becoming the first country to implement a needle exchange program in the 1980s in response to the HIV epidemic. Since then, a focus on harm reduction has been lost. Currently, there are attempts to make drug testing at festivals a reality, although there has been plenty of resistance, especially from the state of New South Wales. Stephen believes that the best chance for drug policy reform in Australia is to wait for more windows of opportunity, like the one that allowed the legalization of medical cannabis recently, and be prepared to have a frank discussion about harm reduction when the opportunity arises. The huge stigma surrounding drug use in Australia will need to be chipped away at – through personal conversations with friends and family, or through events and conferences such as SSDP’s symposium in Melbourne.

Want to make a difference, whether you live in Australia or not? You can support PRISM by donating here – all money raised goes to fund psychedelic research. The Australian entheogenic conference, Entheogenesis Australis, will be held near Melbourne in December 2017. Keep an eye out for the appearance of the Australian Psychedelic Society in Melbourne, and if you’re a student, consider starting an SSDP chapter at your University. DanceWize recruits volunteers every year to provide harm reduction at festivals and events in Victoria, and the Drug Policy Modelling Program, run by Alison Ritter, deserves support in its effort to change policy at the highest levels.