How To Reach A Critical Mass Of Spirituality

We speak to Mike ‘Zappy’ Zapolin, entrepreneur and psychedelic advocate. Zappy is the director of the award-winning documentary “The Reality of Truth,” an exploration of the mystical and spiritual insights that the psychedelic experience can offer. Here we talk to Zappy about his advocacy, the future of psychedelics in the modern world, and how we need to reach a ‘critical mass’ of spiritual evolution. 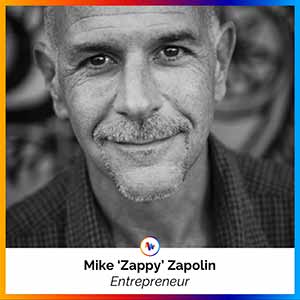 Zappy began his professional life on Wall Street in the 80s, and quickly became a pioneer of internet-based business, buying and selling several popular domain names for massive profit.

Although he previously had profound experiences with psychedelics, his subsequent interest in Jewish mysticism gave Zappy a newfound motivation for investigating the potential of psychedelics.

Zappy firmly believes that spiritual practices such as transcendental meditation, or the exploration of psychedelics, will help us solve a myriad of societal and personal issues, by allowing us to see the world from a more compassionate perspective.

Zappy directed the documentary “The Reality of Truth,” providing a platform for scores of psychedelic experts and other well-known faces to talk about their experiences with healing spiritual medicines. An important aim of the documentary was to make psychedelics less scary – and show that changing yourself for the better is a positive thing that people don’t need to be afraid of.

In January this year, Zappy continued his psychedelic advocacy by publishing a full-page letter to Donald Trump in the New York Times. It asked him to consider legalizing ibogaine, a plant medicine with a proven efficacy in the treatment of addiction. Zappy believes that we are in a critical situation right now, where we have to push natural healing medicines in this way to really make a difference in the world. There is nothing else in the world that can change people’s perspective and induce empathy in the way that psychedelics can.

Zappy points out that every religion has at some point used herbal medicines or meditation as part of religious practice – and that these have been pushed out of spirituality in our modern world. Getting these back to the forefront of society will be crucial in reaching the ‘critical mass’ that will be required to starts solving our problems. When people can realize their mistake is thinking that the human experience reigns supreme, we can tap into the ‘God consciousness’ and start to make a change in the world.