Imagine yourself in the body of an ancient ancestor, Homo Erectus, a species of archaic humans that lived millions of years ago. Your primitive drives are predicated on survival and genetic flourishing. The canopy of your natural habitat is deteriorating, forcing you to emerge out into the savannah. As you walk across the grassy fields tracking footprints and scat, you see an unfamiliar fruit body growing from the earth. Hungry and curious, you eat the mushroom.

Soon enough, you’re catapulted into a different consciousness, subject to massive inputs of data. Various parts of your brain interact like never before, distorting your visual field in a way that both terrifies and inspires. Beyond your conscious capacity, neurogenesis begins to initiate, helping you develop a new way of thinking and acting as a catalyst for human evolution.

Paul Stamets is one of the most reputable, decorated, and self-practiced mycologists in the world. He has dedicated his life, energy, and enthusiasm to the study of fungi and is the owner of a gourmet and medicinal mushroom distributor, Fungi Perfecti. Paul has also written six books on mushrooms and starred in a recently released documentary on the amazing benefits of mushrooms, Fantastic Fungi.

Paul’s most recent patent application is for a nootropic stack (a combination of cognitive enhancers) that contains psilocybin mushrooms, lion’s mane, and niacin. He would like to see this supplement available as a vitamin, claiming that its efficacy in epigenetic neurogenesis has the potential to initiate “the next quantum leap in human consciousness.” 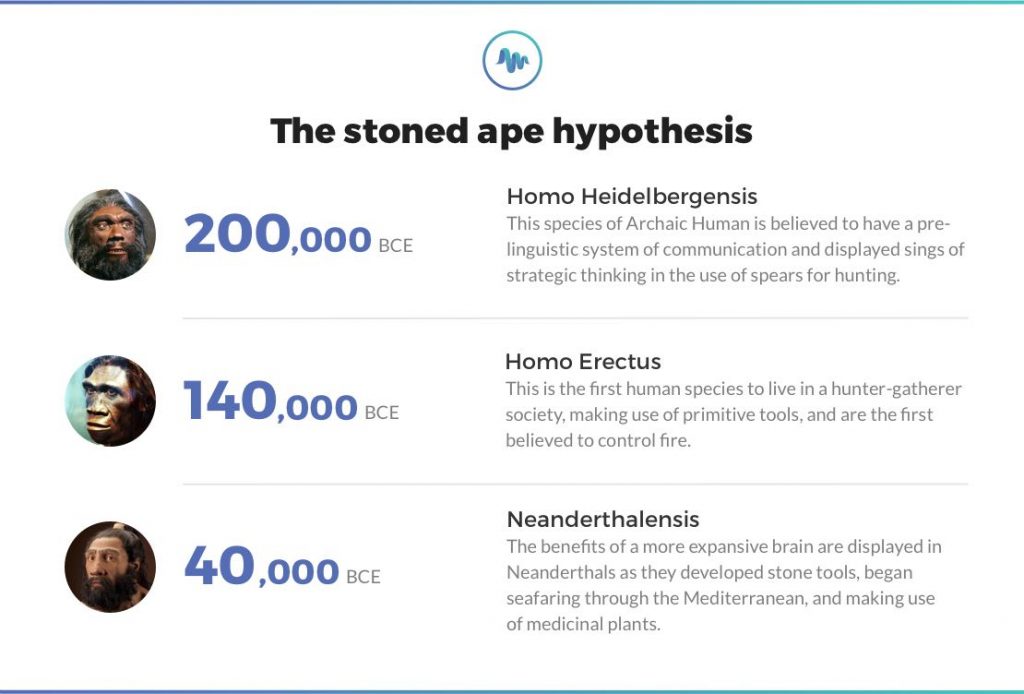 When speaking about human evolution, Stamets often discusses the Stoned Ape Theory. Initially proposed by Dennis and Terence McKenna, it is considered one of the first hypotheses to explain the homo sapiens “quantum leap in human consciousness.” The McKenna’s created this narrative to explain the rapid doubling in size of the human brain, which occurred in as little as 200,000 years.

The brothers proposed that in small doses, the psychedelic compound increased visual acuity, making the consumer a better hunter, resulting in an increased food supply and a higher rate of reproduction. Larger doses led to greater arousal and bonding, diversifying the gene pool.

Perhaps this notion is more digestible if one has experienced the profound and expansive states of being from entheogenic substances. Even for the unpracticed psychonaut, one might consider the likelihood of psilocybin catalyzing the evolution of language, strategic thinking, imagination, and the emergence of the arts.

Stamets is a proponent of the Stoned Ape Theory but prefers to call it a hypothesis, indicating it has strong supporting evidence, but no conclusive science to back it. Stamets believes that psilocybin will continue to help humans evolve, raising the level of global consciousness.

Regular, intentional use of this plant medicine is restricted by its categorization as a Schedule 1 drug by the DEA, suggesting that it has “no currently accepted medical use and a high potential for abuse.” Yet, from clinical research, we know that psilocybin is non-addictive and useful for treating an array of clinical conditions. Paul also speaks to the medicinal benefits of the substance, crediting the plant medicine with curing his chronic stutter in an exceptional experience.

Ready to microdose the Stamets Stack?
Learn how to grow mushrooms from the comfort of your own home with Third Wave’s Mushroom Grow Kit and Course.

Stamets refers to multiple research studies that show how psilocybin creates an extension of the fear response, creating new neurological pathways when faced with threatening situations. For some, these situations often occur as anxiety interferes with social interactions and the ability to cope with the demands of life. Not only does psilocybin promote courage, but it enhances empathy, two characteristics of quality leaders. In more intentional, clinical applications, the extension of the fear response has proven effective in helping people with PTSD.

Stamets’s primary attraction to combining psilocybin mushrooms and lion’s mane is for its dual capacity to both create new neurons and neural pathways, and also to repair existing neurological damage.

Stamets refers to two mice studies where the scientists intentionally damaged the brains of the mice through the introduction of a neurotoxin. The scientists observed the mice’s behavior and noted that they exhibited dementia-like symptoms. Upon introducing lion’s mane, the effects of the neurotoxin reversed.

“The reduction of beta-amyloid plaques in the brains of mushroom-fed mice vs. the mice not fed any mushrooms was remarkable. The formation of amyloid plaques is what many researchers believe is a primary morphological biomarker associated with Alzheimer’s. Plaques linked to beta-amyloid peptide inflame brain tissue, interfere with healthy neuron transmission, and are indicated in nerve degeneration.”

Lion’s mane and psilocybin mushrooms have a complementary relationship that optimizes returns. Niacin is in the stack for deliverability. Stamets reports that the majority of neurogenesis occurs in the extremities; since niacin works as a flushing agent and carries GABA across the blood-brain barrier, it helps with the distribution of the mushroom molecules. From the combination of these three substances, Stamets hypothesizes the benefits of this nootropic stack:

“This unique combination of compounds can be incorporated into other therapies with such combinations providing unique advantages for medically significant advancements in repairing neurons, removing amyloid plaques, improving mental health, cognition, agility, and improving overall the ecology of consciousness.”

Want to grow your own mushrooms from home? Check out Third Wave’s Grow Kit and Course.

Prefer to buy them instead? Check out our Ultimate Guide to Sourcing Psychedelic Medicines for vendor recommendations (in most countries). 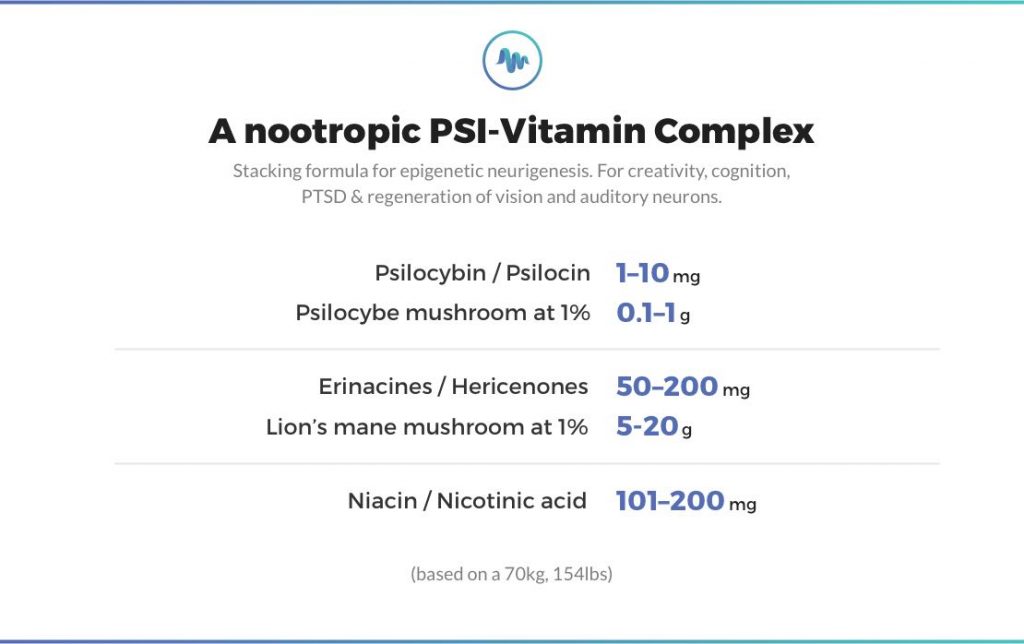 Stamets provides quite a bit of variance in the recommended dose, so it might take some experimentation for what is appropriate for you. Generally, larger people require a larger dose. However, it is best to start with a lower dose and increase the amount bit by bit. Niacin has an uncomfortable effect as it leads to vasodilation and flushing of the skin.

To better gauge your overall sensitivity and risk profile when using hallucinogenic substances, you can use Halugen’s Psychedelics Genetic Test Kit. The test kit analyzes a series of relevant DNA biomarkers, along with data collected from various pre-screening surveys, to provide users with personalized reports & actionable insights into the short and long-term potential of psychedelic-induced risks, such as psychosis.

Stamets suggests a dosing protocol of five days on, two days off, so one does not build up a tolerance. A traditional mushroom microdosing protocol is one day on, 2-3 days off. Again, some experimentation might be required to figure out what works best for you. General thoughts on vitamins and supplements are that you should cycle them periodically rather than follow the protocol indefinitely.

Of course, microdosing is a science that should be personalized to your unique body, goals, and situation. Third Wave’s Microdosing Course can show you to develop your very own microdosing protocol.

Ready to microdose the Stamets Stack?
Learn how to grow mushrooms from the comfort of your own home with Third Wave’s Mushroom Grow Kit and Course.

Humans have more common ancestry with fungi than any other kingdom; humans came from fungi and they are our elders. Mushrooms can kill us, feed us, send us on a spiritual journey, and they can heal us. At the microdose level, psilocybin does not have a noticeable effect. Instead, it has the potential to reduce anxiety, reduce irritability, increase cognitive function and creativity, increase sociability, provide a greater overall sense of wellbeing, and reduce the effects of aging.

This combination of psilocybin mushrooms, lion’s mane, and niacin has the potential to course-correct the direction of humanity by promoting self-awareness, health, well being, and recognition of the interconnectedness of all life.