Psychedelics, Capitalism, and the Commodification of the Sacred

Welcome to our third feature exploring the intersection of psychedelics and mainstream society.

In the ongoing quest to safely bring psychedelic healing to the masses, the past few years have been a boon. Clinical research into the efficacy of MDMA, psilocybin, LSD, and more to treat a variety of mental health issues has exploded; the FDA is steps away from approving MDMA for the treatment of PTSD; and several cities and one state have decriminalized the use of entheogenic plant medicine. And those are just a few developments. This, of course, is what’s being called the third wave of psychedelics. If things go well, the renewed appreciation of these long-outlawed drugs could usher in a revolution in the treatment of mental health—and potentially a paradigm shift in how society at large functions.

That’s if things go well, of course. In all of this promising progress, there are some concerning developments, too—and not just of the legal or political variety. While fears that the US government could shut down research yet again are still valid, a deeper and more insidious threat is brewing on the opposite end of the spectrum: as psychedelics go mainstream, capitalism is swiftly swooping in. That could kill the promise of the psychedelic awakening before it’s even had time to stand up and stretch its legs.

Consider, for instance, these recent Big Money developments. After receiving FDA approval for the use of psilocybin in clinical trials for treatment-resistant depression, the Peter Thiel-backed private company Compass Pathways (which many fear is establishing a monopoly on psilocybin-assisted psychotherapy) became the first psychedelics company to go public on a big US exchange—and its market cap surged to $1 billion on its first day. Meanwhile, Big Pharma corporations Johnson & Johnson and AbbVie have jumped into the ketamine game, and Robert Mercer, who funded Donald Trump’s 2016 campaign as well as right-wing propaganda machine Breitbart, gifted MAPS a $1 million grant for research into PTSD treatments for veterans. With all this action—and much, much more—many in the big business world are projecting that the psychedelic market could be worth nearly $7 billion by 2027. For investors, that means psychedelics are increasingly looking like the next big opportunity.

On the one hand, this is good news, right? If mainstream corporations and entities get on board, then don’t we get what we all want—widespread psychedelic healing for all?

While gaining mainstream acceptance of psychedelic use is certainly the first step on the path toward a more enlightened future, what this capitalistic model ignores—and, worse, threatens—is the inherent element that has made plant medicine so effective for millennia: its sacredness. By transforming psychedelic medicine into nothing but a money-making commodity, Big Business could be endangering a centuries-old practice—and a fledgling movement to create vast societal shift.

While in the Western imagination, psychedelics conjure the idea of ‘60s anti-war protests and philosophies such as “turn on, tune in, and drop out,” the origins of these powerful substances reach much farther back. Peyote, for instance, has been used as sacrament by indigenous tribes in Mexico and the Southwestern United States for as many as 5,700 years. Ayahuasca has been used for healing among the indigenous tribes of Amazonia for centuries; some even speculate that the practice dates back to the earliest human inhabitants of the region. San Pedro, too, has an indigenous history dating back thousands of years, as do ibogaine, datura, and even psilocybin mushrooms.

What all of these ancient rituals have in common is the context in which they are practiced: in religious or spiritual ceremonies. Unlike the still-widespread Western notion that psychedelic drugs are for nothing more than recreational pleasure, in indigenous cultures around the world, psychedelics have long been revered as sacred medicines that are as wrapped up in healing as they are in religion. Like prayer or confession or fasting, psychedelic ceremonies are a devotional ritual steeped in spiritual meaning and connection. More than that, it’s that devotional aspect—and not simply the psychedelic experience—that fosters psychological, emotional, even physical healing. At least, that’s what thousands of years of shamanistic practice contends.

There is certainly still a large dose of this line of thinking in the contemporary psychedelic community. After all, research is increasingly showing that those who experience a mystical-type experience while under the influence of a psychedelic are more likely to see long-term benefits to their psychological health, including a lasting sense of connection to something greater than themselves. This connection is what’s missing from our contemporary realities—which, in turn, is causing the epidemic of mental illness that modern psychedelic research is seeking to cure. In our fast-paced, tech-driven lives, we’ve become utterly disconnected from the world around us, which has left us feeling anxious, alone, depressed, and out of place. To rebuild a sense of connection, according to many psychedelic advocates, we must look back to ancient methods, not forward to the tech-first mindset that got us into this mess in the first place.

And yet, this tech-first mindset is taking over. As these substances gain widespread appeal, the voices calling for honoring the ancient ways are getting drowned out by the sound of money hitting the bank—and the stampede of investors rushing to cash in. While some of these new market players may claim they are honoring indigenous and sacred psychedelic use (consider this press release, which audaciously casts “ancient Aztec medicine” as “the next biotech breakthrough”), the reality is that if they take control of the market, we’re set to see psychedelics stripped of their sacredness. With that, we stand to lose more than ancient ways; we could also lose the potential of a (much-needed) sacred future.

There are a few ways that a capitalist mindset could damage this third wave of psychedelics. The first is that a for-profit model is just that—for profit. When you’re dealing with healthcare, as we’ve learned, that doesn’t work out too well. For one, as companies frantically file patents, there’s the potential for any one company to establish a monopoly on, say, psilocybin-assisted psychotherapy. This is bad for two reasons. One, it means the company can jack the price up as much as they want, and two, they can lower the quality of the service or product.

Even without these two extremes, we may see hints of these issues trickling into the psychedelic free market simply because a capitalistic business model is inherently concerned, above all else, with investor returns—not the well-being of customers. On top of that, with such big promise for big money, business people with no experience in the psychedelic space are jumping into the market without a sound scientific—let alone spiritual—understanding of their very own product. Is an entrepreneur really better equipped to develop and implement a psychedelic psychotherapy program than, say, a psychotherapist who has studied this for decades? Probably not.

This is not to say that all for-profit businesses in the space have only their best interests in mind. In the psychedelic space and beyond, it’s not unusual to see businesses balance purpose and profit to everyone’s benefit. This can come in the form of public benefit corporations, or just purpose-driven companies. But that balance is key. 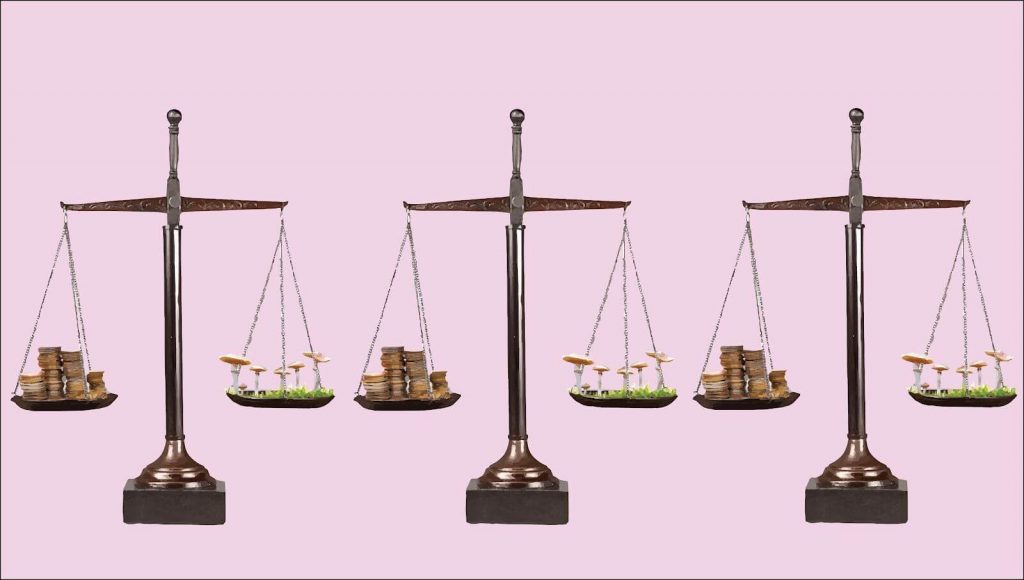 This brings us to the key issue: What these companies are purporting to sell—healing and transformation—cannot simply be bought and sold. While psychedelics certainly enable healing by disrupting our normal states of consciousness and opening us to insight, these realizations alone won’t necessarily alter your life and mindset without doing some work around what they mean. This is what’s known as psychedelic integration, or processing psychedelic-induced insights with a therapist to integrate them into your life.

In fact, psychedelic researchers have long contended that integration is the key component to psychedelic healing, and many believe that integrative follow-up sessions are even more integral to the process than the psychedelic experience itself. In other words, the medicine is just the facilitator, and removing psychedelics from the structure of integrative therapy essentially removes its healing potential and intended purpose.

This isn’t a novel concept in the history of psychedelic use. While in the West, this structure takes the form of psychotherapy, for indigenous cultures, it’s ceremony. In other words, modern research and ancient wisdom agree: there’s more to psychedelic healing than getting your hands on a drug. If in the free market the drug is what becomes the product, people in need of healing will not get the help they need.

THE CULT OF PRODUCTIVITY

There’s another problem with the capitalist model, one that we’re already seeing filtering into the mainstream, and one that quite brilliantly props up capitalism itself. Psychedelics have the power to transform broad social conditions. But increasingly, we’re seeing this power promoted as a way to boost individualistic pursuits—most notably productivity. We’re already seeing the ravages this productivity-above-all-else mindset is causing on humanity at a collective and individual level. If psychedelics become nothing more than the next smart drug promising to help us squeeze more work out of our already overworked lives, then instead of helping us escape or even transform this damaging system, they would serve to pull us deeper into it. And the cycle of capitalism just continues.

Of course, there are exceptions to all of this, and some companies will, potentially, get it right. But who’s to say those are the ones that will survive and thrive? With psychedelics on the brink of widespread, mainstream circulation, we’re on the precipice of a new future, one that could bring an intervention into the ills of modern culture. Yet we can only attain this if we honor the past, and resist the capitalistic urge to see psychedelics stripped of their sacredness and sold for parts. Only by upholding the sacred will we see the true paradigm shift that we need.

Interested in further exploring the intersection of psychedelics and mainstream society? Check out our previous two features: A Sub-Perceptual Promise: Can Microdosing Solve Mainstream Problems? and Finding Awe: Microdosing, Connectedness, and Transformation.