Should We Be Worried About The Future Of Ayahuasca?

Beatriz Labate, PhD, joins us for a discussion on ayahuasca, shamanism and cultural evolution. Her expertise in anthropology gives her a unique perspective on what the commercialization of ayahuasca means for the future of psychedelics, and how psychedelic traditions and cultures will be affected by the growing mainstream popularity of plant medicines. 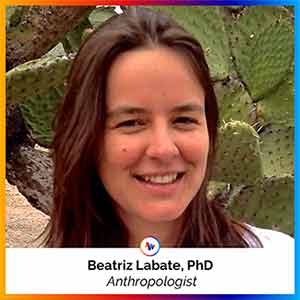 The Sacred Plants of the Americas conference, taking place in late February in Mexico, is the peak of Bia’s career. The conference, which she has organized, brings together people from Brazil, Mexico, the US and Europe to build a bridge between psychedelics and drug policy.

Bia believes that the link between psychedelics and drug policy needs more attention. Psychedelic users often don’t want to be associated with other substances, so carve out a niche for themselves. However, that means that psychedelics get ignored in drug policy discussions, and their criminalization isn’t considered as an issue of justice or public health.

Bia’s journey to this important stage in her career started in her 20s, when she backpacked around the world for a year and a half. Bia experienced many different psychedelics, but it was an ayahuasca ceremony with the UDV church in Minas Gerais that ended up having the the biggest impact on her life. “The Ceremony was the most beautiful revealing thing. I felt blessed.” She decided to journey to the Amazon to discover more about ayahuasca.

After spending many months with different shamans and ayahuasca practitioners in the Amazon, Bia decided she wanted to spread the news about its sacred properties. She began organizing conferences and writing books, and started meeting other people who also wanted to expand the knowledge of ayahuasca beyond its roots.

Now, Bia is optimistic about the future of ayahuasca in modern society, despite the challenges it faces. Medical or policy experts give opinions on ayahuasca without ever having tried it; fake shamans erode its cultural heritage and risk lives, and commercialization threatens to not only destroy the sanctity of ayahuasca, but the very environment in which it grows.

Going forward, Bia emphasizes that we have to consider justice and cultural sensitivity as the most important issues for ayahuasca’s inclusion in mainstream society. To make the most of this unique sacrament, we have to respect its heritage and not abuse its power.

Woman Banned From US After Border Agent Finds Proof Of Drug Use On Phone – the woman, from Canada, had her emails searched on her phone while trying to enter the US. They found an email with her doctor about a fentanyl overdose she survived a year ago. She has been issued a lifetime ban from the US as a result.

Norway takes a major step towards LSD decriminalization in the Supreme Court – they will decide whether current penalties are in line with the scientific evidence regarding LSD’s safety.