What’s In The DMT Headspace?

Shane Mauss, psychedelic comedian, explains his transition into the world of mind-opening substances, and how they influenced his career in stand-up. Shane describes how his experiences with DMT and psilocybin mushrooms have shaped his view of the mind and the world, and what psychedelics can do for people who have developed unhealthy modern habits. 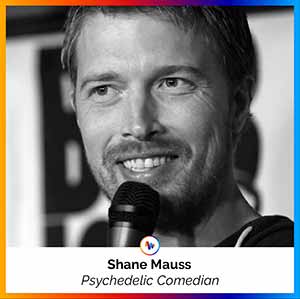 Raised in a small town, with a sheltered upbringing, Shane Mauss became a natural rebel. First taking psychedelics at the age of 16 was purely an attempt to get in trouble – but led to some genuinely profound experiences. Shane describes the therapeutic benefits of his early psychedelic journeys, allowing him to understand the aesthetic beauty of the world and expand his consciousness.

Shane began his career as a short-joke, absurdist comedian, but eventually decided that he wanted to start performing themed shows with a more serious and informative angle. He realized that, having so many stories of psychedelic experiences under his belt, it would be possible to theme a show around psychedelics.

He was hesitant about the idea first – being aware that audiences could react negatively when the topic was breached unexpectedly in his stand-up shows. But after being interviewed on several podcasts about his experiences with DMT, Shane decided that the audience was there, and performed a trial run of 100 tour dates.

Now, Shane is preparing a documentary about psychedelics, and a stand-up special for TV. He hopes that this will lead to a follow-up cross-country tour of his psychedelic comedy show.

The experiences with DMT that propelled Shane to podcast fame are evocative and intense. Shane describes being transported to a ‘hologram computer-chip city of lights,’ that felt immensely familiar and more real than reality. “I thought I had broken my brain,” he says.

Shane encountered entities in the DMT world. He reacted with fear at first – and when he panicked, they told him to calm down. They showed him how they communicated. He describes how they messed around with his mind – playfully but with purpose. Eventually he was shown a 2D plane that looked out of place – and he was suddenly back in this reality.

His experiences with DMT gave Shane something to focus his life on. He hails their ability to open the mind – bringing us back to a childlike sense of curiosity. DMT, he says, can show us the mechanisms our brains create to help us cope with the modern world. Being able to see these mechanisms can help us break free from harmful habits and unhealthy tunnel vision.

Wired article about mapping DMT in the brain

Reason.tv video about microdosing in business

Set and Setting: read our guide to avoiding bad trips and crafting a great psychedelic experience!

Episode 58 How Psychedelics Can Help You Find Fulfilment In Life Kim Iglinsky
Episode 49 Encountering Your Shadow Side With Psychedelics James W Jesso
Episode 31 Could Psychedelics Become A Crucial Part Of Our Education? Kenneth Tupper
Episode 30 Is Microdosing Right For You? This Entrepreneur’s Experiment May Help You Decide Janet Chang
Episode 24 Were Early Christians Tripping On Psilocybin Mushrooms? Jerry Brown
Episode 2 How Do You Treat PTSD With Psychedelics? Brad Burge
Load more podcasts