Can Psychedelics Be Used As Nootropics?

Jesse Lawler, host of the Smart Drug Smarts podcast, joins us this week for a discussion on nootropics, transhumanism and the psychedelic experience. Jesse shares his opinions on using psychedelics for self-improvement, and where he sees the future of psychedelics in mainstream society. 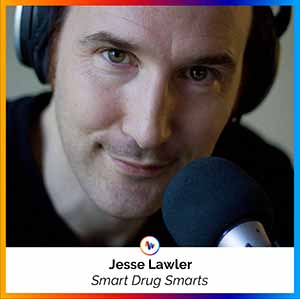 Jesse had always been curious about psychedelics – but growing up in the Nancy Reagan era of psychedelic hysteria meant that he fostered an irrational fear of drugs. It wasn’t until he was 27 that he discovered that psychedelics posed no physical danger to people, and he tried his first dose of a psychedelic.

Now, he tries to fit in a full-dose psychedelic experience every few months, as part of his regimen of self-improvement.

“Psychedelics prove to you that there’s more than one way of seeing the world,” Jesse says. However, he urges caution. High doses can be as terrifying as they are joyful. He suggests that they should be used sparingly and with a skeptical mind.

Psychedelics will absolutely become a part of our cognitive evolution, says Jesse, and he believes that people will look back on prohibition and not understand why we held ourselves back for so long. At the same time, we must not be afraid of taking huge leaps in the technology of mind – we didn’t lose our humanity when people started using walking canes or eyeglasses, and we won’t suddenly lose our humanity by using brain implants or by microdosing psychedelics.

Jesse uses a variety of nootropics in his daily life – some to give him focus with tasks like coding, and others to help him with more creative tasks. Microdosing falls into this latter category, Jesse suggests, allowing him to approach more abstract problem solving.

When it comes to the future of psychedelics in society, Jesse believes that we won’t see a huge change once they become legal: “Just because psychedelics will get more popular doesn’t mean that they will be truly ‘popular’ on the same level as alcohol or tobacco. I don’t think there’s going to be a massive change.”

Regardless of whether psychedelics will ever become mainstream, there will always be a dedicated core of self-improvement enthusiasts using psychedelics to become better people.

A British woman has died in Paris after accidentally ingesting N-BOMe, thinking it was cocaine

The difference between LSD and psilocybin mushrooms