How To Convince Your Boss To Go On A Psychedelic Retreat

Michael Costuros, founder of Entrepreneurs Awakening, talks about why the ayahuasca ceremony is an integral part of his high-end business coaching. We hear about Michael’s extensive experience with plant medicines, and why he decided to combine the lessons of ayahuasca with his entrepreneurial flair to produce a groundbreaking business model. 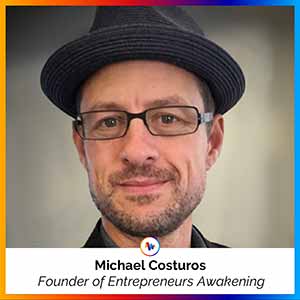 Since 2011, Michael has been leading a business mastermind program aimed at tech entrepreneurs. Unlike most business coaching, however, this course includes a ten-day long trip to Peru, where participants take part in three traditional ayahuasca ceremonies. Over the course of the three-month long program, participants are treated to 1-on-1 coaching with Michael and given extensive integration after their ayahuasca experience.

What made Michael decide to use psychedelics in his high-end business coaching?

Born in the Bay Area to Hippie parents, Michael always had an interest in psychedelics. In 2008, with his tech startup facing a number of challenges, his wife convinced him to travel to Peru for an ayahuasca ceremony. Despite his initial reluctance, the ceremony revitalized his interest in his business. He returned to San Francisco “reinvigorated and free.”

Michael wanted to apply the benefits he’d found from his experience to other business owners. He knew he’d be able to help those entrepreneurs who wanted to improve themselves and grow their companies. He realized that, through the ayahuasca experience, he could help people remove all the ‘schmutz’ from their lives, allowing them to feel ‘more like themselves.’

Michael’s course doesn’t come cheap – starting at around $11,000. But for a three-month long business mastermind, this isn’t an unreasonable charge, especially considering it includes a ten-day long retreat in Peru. Michael states that he doesn’t make much money through this business, just about covering costs, and that he would make much more (and have more time to himself) offering a standard business mastermind.

Finally Michael mentions that he sees psychedelics as the future of personal and psychological healing and self-improvement. He thinks that the countries that remain with a prohibition-era mindset for the longest will miss out the most on the myriad of benefits they can offer.

The first ever Cannabis drive-thru has just opened in Colorado

Our founder Paul will be talking at the NextWeb conference in Amsterdam – keep an eye out for updates!

Episode 61 Surviving PTSD With Cannabis And Ayahuasca Matthew Kahl
Episode 59 Why Psychedelic Societies Are So Important Stefana Bosse
Episode 58 How Psychedelics Can Help You Find Fulfilment In Life Kim Iglinsky
Episode 56 Should We Keep Psychedelics Weird? Sophia Rokhlin
Episode 55 What Does A World-Class Fitness Coach Have To Say About Microdosing? Ben Greenfield
Episode 54 What Is The Optimal Setting For Microdosing? Tao Lin
Load more podcasts