How Do You Treat PTSD With Psychedelics?

Our guest on this episode of The Third Wave Podcast is Brad Burge; Director of Communication and Marketing at MAPS, the Multidisciplinary Association for Psychedelic Studies. Brad talks to us about his own experiences with psychedelics and how they helped him overcome bipolar disorder. Brad explains MAPS’ current work to get psychedelics approved by the FDA for various therapies, especially MDMA for the treatment of PTSD. Brad tells us what this means for the future of ‘Big Pharma’, the psychedelic movement, and our approach towards mental health. 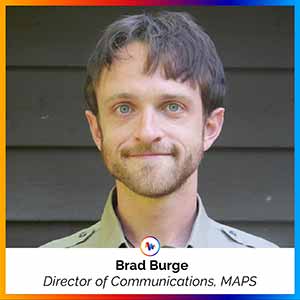 Brad first talks about the recent Horizons conference in New York, a gathering of researchers, psychologists and therapists interested in psychedelics. This year, around 80-90% of the delegates were there for the first time, highlighting how quickly the psychedelic movement is growing.

Brad’s own experiences with psychedelics have clearly influenced his work; being diagnosed with bipolar disorder at 11 years old, he was treated with lithium and Prozac, but discovered the healing properties of marijuana at 20. Cannabis improved his appreciation of the world, and reduced his anxiety. Realising that everything he’d been taught about drugs couldn’t be trusted, he researched other drugs and eventually tried some psilocybin mushrooms and LSD. Both experiences further enhanced his appreciation of the outdoors, but LSD was the experience that really changed his mind. The trip lasted 12-14 hours, and he says it was the first time he realised there was nothing essentially wrong our out of balance with his consciousness. He didn’t go back to his lithium prescription. It still took a lot of work for him, but LSD prompted him to exercise more, spend more time outside and drink less alcohol. Now he is free from prescription drugs and feels totally functional.

Brad clarifies that people often look at examples like his and talk about marijuana being a ‘gateway drug’. This has been disproved; people who take marijuana are no more likely to go on to take other drugs. But if people do end up using LSD or other drugs, it’s more likely that they used marijuana in the past – these are two different concepts that are often confused.

It makes little sense that marijuana, a drug similar to alcohol in its effects (although less harmful), is considered a schedule 1 drug by the DEA. Brad tells us that, historically, this was a political decision. The criminalisation of marijuana in the 1930s by Harry Anslinger was arguably the start of the drug war, and was an attempt at targeting ethnic minorities. The criminalisation of psychedelics in the 60s and 70s was an attempt by the Nixon/Reagan administrations to quash student radicalism and civil actions. These are the unfortunate facts of why the DEA schedules psychedelic drugs without basis in evidence even now.

There is still hope that the DEA will make a change; Brad tells us about their recent announcement of providing researchers with licenses to grow their own marijuana for research. Previously, all researchers had to obtain their marijuana from a government owned farm in Mississippi. Now, the monopoly of the federal government on marijuana production that has been limiting research may be lifted. All that needs to happen then is for the FDA to approve marijuana for medical use; then the DEA would have no choice but to remove it from the Schedule 1 list.

Considering that in the 60s and 70s, the DEA approved prescription drugs that did not have solid scientific evidence, it appears that the DEA do not ground their decisions entirely in the research (For more see “Anatomy of an Epidemic” by Robert Whittaker.) Brad tells us that although the DEA make poor decisions, the FDA have been very supportive of psychedelic research. The FDA genuinely do want to develop drugs that work, not just drugs that benefit Big Pharma by requiring frequent prescriptions with minimal benefits.

If things go as they are, the FDA are set to be very supportive in MAPS’ aim to get MDMA approved for therapy by 2021. If that happens, Brad tells us to expect Big Pharma to be unhappy; not only would they struggle to patent drugs like MDMA or psilocybin, but drugs that work through one or two doses a year are not profitable at all. Big Pharma has a lot of lobbying money, and they will use it to keep pushing against psychedelic therapy. Their main objective will be to convince people that they are broken, and need constant chemical intervention to fix them; that way, they can keep selling their ineffective, expensive drugs.

MAPS is currently spearheading a new form of capitalism called the ‘Benefit Corporation’, which allows a company to do social good while still generating an income. Other examples of these benefit corporations are Mozilla and Patagonia. In the case of MAPS, once MDMA is approved for therapy, income can be donated from their benefit corporation back to the non-profit part of the business, allowing more research and less time asking for donations!

Brad tells us that psychedelic therapy will be a paradigm shift in the way we view mental illness. It does not have to be about taking a drug for every day for the rest of your life, feeling like there is something permanently wrong with you. MAPS’s proposed therapies will be humanistic, and not determined by profit. MAPS also hopes that medicalization of psychedelics will lead to a legalization of psychedelics, as we’ve seen with marijuana. MAPS believes that psychedelics can be used for spiritual growth and creative purposes – even for fun, when used responsibly. Rick Doblin, the founder of MAPS, has mentioned the idea of having ‘licenses’ for psychedelic use. Just like how you have to pass a test to drive a car, you would need to prove your responsibility with the use of psychedelics. Break the rules, and you lose your license.

Finally, Brad talks to us about his opinion on the use of psychedelics in the entrepreneurial world. More and more, creative business people are using psychedelics to provide them a boost in their work. Brad thinks this is a powerful part of the psychedelic movement, because rather than a Timothy Leary ‘Turn on, tune in, drop out’ attitude, it’s a ‘Get better at what you’re doing!’ attitude, which is naturally less counter-cultural. Microdosing in a business sense, however, will naturally bleed through to affect people’s spiritual wellbeing. Brad points out how much capitalism relies on how people are feeling – especially in the stock market – so psychedelic use in the business world could really end up making a big difference.

Brad believes, however, that the fastest way towards psychedelic legalization is through approving MDMA therapy. To do that, MAPS needs to raise $13-14million in the next five years. Entrepreneurs, enthusiasts and sufferers need to all come forward and talk openly about psychedelics to help reduce the stigma!