Why Decriminalization Will Save Lives

In this episode of The Third Wave Podcast, we talk to Jag Davies from the Drug Policy Alliance, and learn about why the legalization of psychedelics requires an open dialogue around the harms of criminalization. Jag tells us that if we rely on the approval of psychedelic therapy, psychedelics may only become available for a privileged few, continuing the marginalization of those who have been left behind by decades of prohibition. 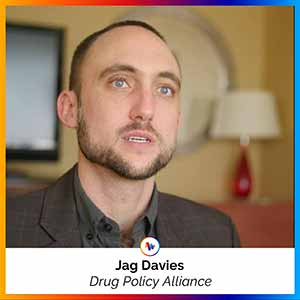 Jag recently spoke at the Horizons conference in New York, where he discussed a problem in the psychedelic movement. The DPA believes that putting too much emphasis on the approval of psychedelic therapy will leave behind marginalized people in society, and won’t do enough on its own to change the criminal status of psychedelic use. Jag believes that we have to take into account the harms of prohibition, and think about reducing prohibition-related harms for everyone, not just the wealthy people who could afford psychedelic therapy.

Jag points out that right now, only around 10% of people are in support of the full legalization of psychedelics. He believes that the approval of psychedelic therapy will not be enough to overturn the anti-drug majority. However, he says that around 60% of people (from polls in primary states) support ending arrests for drug use. The support for decriminalization is bipartisan, too, and he points out the support in republican states for marijuana legalization in the recent election. He believes that this shows people are willing to consider decriminalization, or reducing criminalisation-related harms, as a first step towards legalization.

The most important place to start, Jag believes, is in institutions that employ zero-tolerance practices. Universities, nightclubs, festivals… these places are responsible for a large amount of prohibition-related harm. A couple of years ago, the DPA started the Safer Partying Campaign, which aims to publicize projects like the Zendo Project; groups that provide harm reduction services in zero-tolerance institutions. On-site drug testing is a big focus of this initiative, and recently DPA partnered with Insomniac Productions (one of the largest event production companies in the US) to implement drug testing services at their events. These approaches will highlight to people the harm of prohibition, and the benefits that can be achieved through harm reduction and decriminalization.

The pattern of prohibition and prohibition-related harms has been seen before, especially with alcohol prohibition in the 1920s. Jag believes that for people to see the parallels between psychedelic prohibition and alcohol prohibition, we need to start changing the perceptions surrounding psychedelics. He illustrates how much fear and stigma still surrounds psychedelics with a recent poll; only 16% of the US electorate believe that psychedelics can be used safely. This is not much better than their views on heroin and cocaine! Prohibition and the drug war have scared people into believing myths, and we still have a lot of work to do to get people aware of the truth.

Jag discusses how marijuana legalization has had an easier time than psychedelics, simply because so many people use it. It was easier to break down the myths of marijuana use when people could see for themselves that it was not harmful. That helped the approval of medical marijuana, and led together to legalization. With psychedelics, so few people use them that we have to work harder. People need to talk about their psychedelic use, and especially those who would not risk losing their jobs and children, or gaining a criminal record. These privileged few who are free to talk about their psychedelic use need to do so, and need to do it in a tactful way, that encourages people to reconsider the myths around psychedelic use. Even if people don’t agree that psychedelic use is for them, everyone should be able to agree that prohibition is harmful and wrong.

In light of the recent election, Jag says that we must fight even harder to prevent the government using drugs as a scapegoat. Even though republicans voted for medical marijuana, it’s possible that the government will try to demonize psychedelic use as the Nixon/Reagan administrations did in the 60s and 70s. Jag recommends the works of Dr Carl Hart, especially his book ‘High Price’, which looks at how drug use is often just a scapegoat for economical and societal issues. Now, with our dire economical situation and climate of fear, we could be in for another campaign against drugs. Jag says that we have to use our best tools; free communication and information, people’s distaste for mass incarceration, the facts about the harms of criminalisation… then we can begin to repair the untold harms of prohibition, and work towards building a new world where our policies reflect our values, and marginalized people have the same rights as the privileged.

Episode 66 Transitioning From ‘Business As Usual’ With Psychedelics
Episode 64 Why Improving Drug Policy Will Be An Uphill Struggle Charlotte Walsh
Episode 63 The Future Of Psychedelics: Medicalization, Microdosing, And The Mainstream Will Siu
Episode 62 When CEO Stands For “Cosmic Engagement Officer” David Bronner
Episode 59 Why Psychedelic Societies Are So Important Stefana Bosse
Episode 56 Should We Keep Psychedelics Weird? Sophia Rokhlin
Load more podcasts