Jerry Brown, PhD, author of Psychedelic Gospels, joins us to talk about psychedelic mushrooms in early Christian society. We hear about the evidence for psychedelic use that exists in Christian art, and how the Inquisition could have resulted in the destruction of these psychedelic traditions. Jerry also shares his vision of a future with freedom to practice psychedelic use as part of our basic religious rights. 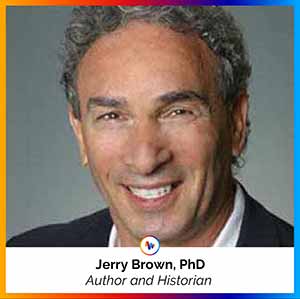 Jerry was professor of anthropology at Florida International University for the past 39 years, and ran a course entitled “Hallucinogens and Culture.” Unsurprisingly, his classes were always popular.

Jerry’s course covered the indigenous use of psychedelic plants, including Amanita muscaria; the famous fly agaric mushroom. This red and white-spotted mushroom was used mostly by Siberian nomads, who noticed their reindeer acting strangely after eating the mushrooms.

They found symbols of psychedelic mushrooms spread throughout Europe and India, as far back as 300AD and throughout the Middle Ages. There’s evidence to suggest that both Amanita muscaria and Psilocybin mushrooms were used in secret rituals throughout Christianity.

During the Inquisition of the Middle Ages, herbal medicines and midwifery were clamped down on, and treated as witchcraft. It’s believed that the Inquisition was a large factor in the gradual decline of psychedelic symbols from Christian art.

Jerry hopes that we won’t see another Inquisition-style crackdown on psychedelic ritual. He envisions modern psychedelic centers, where anyone can go to explore psychedelics in the presence of trained guides. He thinks that this time, a psychedelic renaissance is unstoppable.