How Brain Scans Reveal The Ways LSD Expands Our Consciousness

Lysergic acid diethylamide. Arguably one of the most fascinating chemicals known to humankind. Since its accidental synthesis by Albert Hoffman on 16 November 1938, LSD has been a center point of western counterculture, spirituality, and mind expansion.

A lysergic trip lasts roughly 12 hours and can be the most intense, life changing experience a human being can undergo. LSD opens the ‘doors of perception’, allowing the user to go beyond normal sensual, psychological, and spiritual experience to the vast unexplored planes of the unconscious mind.

Since the mid-1950s, millions of people have worked with LSD. Artists, musicians, businesspeople, entrepreneurs, and everyone in between have experienced LSD. Despite this, we know remarkably little about how LSD works in the brain.

WHAT WE KNOW SO FAR

The psychological and physiological effects, although subjectively documented and explored extensively from individual experiences and accounts, can be rather unpredictable. However, it is fairly certain that LSD’s characteristic psychological effects are due to its mimicking of serotonin, a neurotransmitter linked to mood regulation and memory.

Our understanding of the human mind is basic at best, and so naturally, attempting to fully understand the complex interaction of a molecule such as LSD with the brain is a foreboding task.

However the secrets of Lucy are slowly being revealed through objective experimentation and technological advancements. And, if you’re as curious as I am, you’ll be craving to understand what’s going on behind the scene of the psychedelic experience.

For a very short period of the 20th century, LSD was legal, widespread, and gaining rapid momentum among the hippie counterculture movement. During this time, studies conducted by the researchers of the time showed great promise for the molecule’s therapeutic uses. However since its prohibition—a decision that many argue had political motivation—research has all but dried up. Until recently.

Professor David Nutt, a researcher from Imperial College London, launched an almost completely crowdfunded study involving brain scans of participants while under the effects of a moderate dose of 75ug of LSD. 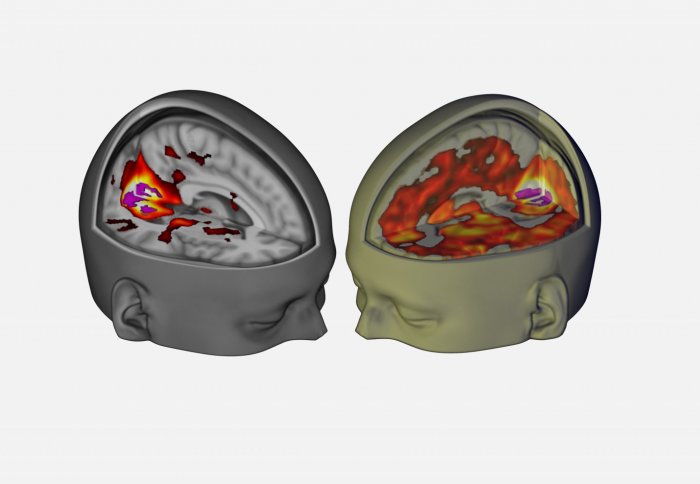 Brain activity on LSD (right) is much higher than normal.

The scans show a massive increase of brainwave activity, as well as communication between parts of the brain that usually would never communicate. This explains certain effects of LSD, such as synesthesia (the merging of sense experience), and visual hallucinations.

These findings prove that LSD causes a massive change in brain activity; specifically, LSD affects the presence and frequency of alpha brainwaves in a manner associated with meditation, creativity, enhanced problem solving, and reductions in depression, stress, and anxiety. This highlights LSD’s potential for drastic change in an individual’s psychology.

I think most psychonauts would attest to the ability of psychedelics—LSD included—to drastically alter the user’s thought patterns, to open the mind’s web of conditioning to new perspectives, new ways of looking at situations. And as Wayne Dyer, a famous spiritual teacher, is known to say, “If you change the way you look at things, the things you look at change.”

A FUTURE WITHOUT FEAR

Even though ranked as the second least harmful drug (just below psilocybin mushrooms) and far above cannabis, tobacco, and alcohol, LSD remains illegal in the UK since 1966. Due to its schedule 1 status, it is extremely hard for researchers to get a hold of the substance, let alone fund research projects to try to determine the potential benefits, or negative side effects, of its use.

What is certain however, is that current research points heavily towards the idea that LSD, and other psychedelic substances, could be used both therapeutically and for personal growth. You don’t have to go far to find individuals proclaiming the great changes psychedelic use has made in their lives and minds.

We can only hope that one day, perhaps soon, that the cultural stigma of psychedelic drugs such as LSD might be lifted; that as a species we can look objectively at the potential for the development of our culture, and of ourselves.

They open you up to the possibility that everything you know is wrong.”

Third Wave aims to help people learn about safe and intentional psychedelic journeying. For those not quite ready to take the plunge into a full-on macrodose, we’ve created an extensive Microdosing Course. You’ll learn how to elevate your mind, body, and spirit with the basics of microdosing—then dive deeper, tailoring your routine to meet your personal goals, enhance creativity, and optimize performance.