Can Psychedelics Help Us Accept Death?

On this episode of The Third Wave Podcast, we speak to Gay Dillingham: filmmaker, environmentalist and producer. Gay has just released a film 20 years in the making, “Dying to Know”, a documentary about the relationship between two of the most influential people in the history of modern psychedelics, Timothy Leary and Richard Alpert (or Ram Dass). The film brings us to face with the taboo of death and how the psychedelic experience can help our society come to terms with mortality. Here, Gay discusses the making of the film, along with her own encounters with death and tragedy, and how psychedelics could begin to change the way we view mortality. 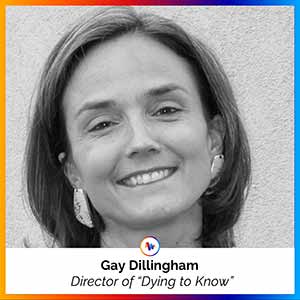 Gay begins by explaining that “Dying to Know” is a human story, about two men who were instrumental in bringing psychedelics to the forefront of modern society, and about the taboos that are hardest for us to talk about. Gay believes that through Timothy Leary and Ram Dass, we can approach death in a fresh and unique way, as a psychological transformation rather than an end of consciousness. And of course, psychedelics could be the tool to help us understand this concept.

Gay tells us that part of the reason for her getting involved in this film was her own personal history with tragedy. When she was 17, her 20-year-old brother was killed in a car accident; he had been the center of her world, and his death brought her to her knees. Gay says as a result of losing her brother, she had to grow up very quickly. She found that in death there is trauma, but also rebirth. This meant that she naturally became interested in the teachings of Leary and Dass, who espoused the thought of psychological rebirth.

However, Gay did not immediately fall in love with Leary or Dass. Her first encounter with Timothy Leary was during his lecture tours in the 80s – but she only saw the showman, not the person. When Leary announced to the media that he was dying in 1995, Gay and several other filmmakers decided to attempt to get Leary and Dass together to discuss their lives on film. Even though Gay was the youngest there, she was chosen to direct the film. She was familiar with personal tragedy, and had also read extensively around the pair, especially Leary’s book The Psychedelic Experience, based on the Tibetan Book of the Dead.

Gay interviewed the two men in her living room in 1995, and taking from their example, decided to leave the setting open, allowing them to discuss their relationship organically. Gay gradually came to know the men as their human selves, rather than the caricatures painted of them in the media. The experience was very uplifting, says Gay, and it was clear how special their relationship was. It had genuinely affected a whole generation.

As the years passed following the interview, and Timothy Leary himself passed away in 1996, Gay felt increasingly guilty for not finishing the film. After seeking advice from Ram Dass, she didn’t give up on the project. Her experience of being fired from her job in environmental regulation in New Mexico (for being a ‘known environmentalist’, according to her new boss) prompted her to think about the cycle of life and death, and why modern humans struggle to address these big questions.  She finished the film in 2014, and believes that it would have been very different if it had been finished ten or fifteen years earlier.

Gay points out that the important point of the film, the whole reason for its being, is to ask the questions about death that we are all afraid to ask. It doesn’t try to tell people what to believe, but tries to present a dialogue between two men who have a lot of experience. Leary and Dass even have different opinions on the matter anyway – and are often presented as two opposing views, one more scientific and one more spiritual. Gay says that for her, it reflects what’s going on in her own head; a conflict between science and mystery.

Psychedelics play an important role in being able to discuss mortality. The recent evidence from various studies, showing that psilocybin can help us accept death, demonstrates how psychedelics could help us face our fears. Gay states that it’s this ability of psychedelics to release the control of fear that led to their criminalisation in the 70s. Leary’s ideas were too radical, too anti-establishment, that he ended up being the first casualty of the drugs war.

Our discussion with Gay turns, inexorably, towards Trump. In an excellent essay by Charles Eisenstein, author of Sacred Economics, he discusses the things in life we are too afraid to confront or even acknowledge exist. Gay agrees and adds that, now our fears and shadows are more in the open, we have a chance to confront them more directly and break through towards liberation. And we now have the tools to help us face our fears better than ever before.

Gay talks to us about the impact her film has had with viewers from all demographics; even people who had not heard of Timothy Leary or Ram Dass, or had never taken psychedelics, were saying that the film meant a lot to them. Gay hopes that the film will start a dialogue about drugs and their role in helping us accept mortality. She mentions the rise of shamanism in modern society, and the successes of psychedelic churches such as the UDV and Santo Daime.

If you want to contribute to the growing discussion around psychedelics, you can sign up for a film screening of Dying to Know in your city. Screenings of the film are followed by discussions with various experts to help expand the dialogue around drugs and spirituality. As Gay says, film is the modern campfire, and we need screenings to focus our discussions.

You can also donate to the IndieGoGo campaign to receive a stream of the film, as well as additional perks.

Episode 59 Why Psychedelic Societies Are So Important Stefana Bosse
Episode 55 What Does A World-Class Fitness Coach Have To Say About Microdosing? Ben Greenfield
Episode 54 What Is The Optimal Setting For Microdosing? Tao Lin
Episode 52 The Future Of Psychedelic Retreats Martijn Schirp
Episode 49 Encountering Your Shadow Side With Psychedelics James W Jesso
Episode 45 Psychedelics – A Future Service Industry? Thomas Roberts
Load more podcasts