Could Psychedelics Become A Crucial Part Of Our Education?

Kenneth Tupper, drug education expert and co-director of the BC Centre on Substance Use, talks to us about his interest in ayahuasca and the potential of psychedelics to expand our cognitive capabilities. Kenneth discusses society’s resistance to psychedelic knowledge, and what we can do to revolutionize concepts of evidence-based medicine and objectivity. 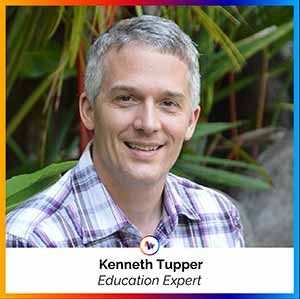 It was Aldous Huxley’s final novel, Island, that first inspired Kenneth to enter the world of psychedelics. While studying for a degree in education at the Simon Fraser University in Burnaby, BC, Kenneth wrote a thesis on the topic of entheogens as cognitive tools. His interest led to a fellowship to visit Brazil – allowing him to drink ayahuasca for the first time with the Santo Daime church.

His experience with ayahuasca convinced him to study for a PhD on the use of entheogens in education. Despite being cautioned against following this path by colleagues, he was able to publish his work in education journals (despite intense controversy among his reviewers).

Kenneth believes that psychedelics are able to catalyze mystical experiences that many people could benefit from. It’s a kind of experiential education, says Kenneth – allowing people to connect to their spirituality, and helping us see the world from a new perspective. Just like how experiential education programs like Outward Bound have helped young people grow and develop, he believes that psychedelic experiences can produce openness and a connection to nature.

Of course, giving psychedelics to young people is a controversial concept. Kenneth also suggests the benefit of allowing teachers to undertake psychedelic experiences – opening them up to different forms of learning and teaching.

After fourteen years of working for the British Columbia Ministry of Health, Kenneth is now a co-director for the BC Centre on Substance Use. There, Kenneth oversees the planning for research on MDMA and psilocybin for various conditions. Research into ayahuasca is more difficult at the moment, as Health Canada views it with some suspicion.

Currently, Kenneth is a co-investigator on a qualitative research study on the use of ayahuasca in people with eating disorders. His team’s initial findings suggest that ayahuasca can offer an insight into the condition – he describes one woman who “had a vision of two female figures – one skeletal, wraith-like, decaying; and one a full-figured goddess. She knew which one she wanted to be.” Kenneth hopes that his research into ayahuasca will be able to expand in future.

Finally, Kenneth talks about the revolution in thinking that psychedelics could introduce to society. He believes that the notion of objectivity in science (which is a fairly recent trend) will be challenged by the experiences that psychedelics provide. The authorities of today, just like the church fathers reacting to initiatives of early modern science, think they know everything and don’t want to accept new tools. Psychedelics can be the new telescope – changing everything we think we know about how the world works.

Oregon partially decriminalizes drug possession – possession of small amounts is now only a misdemeanour. The new law also attempts to reduce the amount of racial profiling by law enforcement.

On the other side of the US, Jeff Sessions has announced that he wants a return of the “just say no” DARE campaign in US schools, despite the fact that it was completely ineffective.

The South by Southwest (SXSW) conference – we’ll be applying to speak!