The Science Of Serotonin: How Do Psychedelics Influence Behavior?

We’re joined by Dr Zach Mainen, neuroscientist and co-director of the Champalimaud Centre for the Unknown in Lisbon, Portugal. Zach studies the role of serotonin in behavior and learning; he explains what his results could tell us about the way psychedelics work in the brain. We also discuss future research into microdosing that could help us understand its true potential. 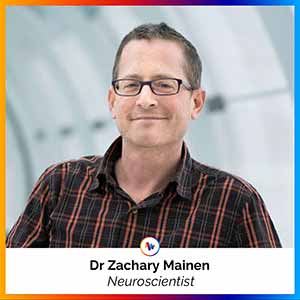 Although Zach started out as a student of psychology and philosophy as an undergrad, he decided (on the advice of his tutors) to move into neuroscience. He started working towards an understanding of the detailed mechanisms of the brain – at the level of individual cells and synapses.

After some years, Zach became frustrated with the perceived lack of progress in this area. He decided to move away from the cellular and molecular level, and start studying behavior. It was around this time that he first encountered psychedelics, and one LSD experience in particular helped to reinforce his interest in behavior and cognition.

Now, Zach runs a neuroscience program at the Champalimaud Centre for the Unknown in Lisbon, Portugal. His goal is to understand how the brain gives rise to intelligent adaptive behavior – including decision making. Much of his research is focussed on the neurotransmitter serotonin, which most classic psychedelics mimic in the brain.

The latest research from Zach’s group shows how serotonin is involved in re-learning associations. In their study, mice learned a certain association (i.e. lever push = treat). Then, the conditions were changed: the lever now produced an uncomfortable effect (a puff of air to the face). The mice now had to re-learn their association of the lever with a positive effect.

Previous research had shown that serotonin is involved in this re-learning process, making it easier to forget the old association. What Zach’s group wanted to know was how serotonin was doing this – and they found, by looking at single neurons in the mouse brain, that serotonin was enhancing neurons’ response to surprising events. Overall it means that serotonin allows the brain to be more adaptable to a changing environment.

WHAT DOES THIS MEAN FOR MICRODOSING?

How is this relevant to psychedelics and microdosing? Zach is hesitant to make speculative leaps in judgement, but mentions studies that show serotonin reducing impulsivity and promoting patience. He says it would be interesting to see the effects of microdosing in a task that requires impulse control. Maybe microdosing could be useful in helping people break out of habitual behaviors.

Could microdosing have a role in human evolution? Zach points out that evolution needs a component of variation to work. In our case this is genetic diversity. Microdosing could be a new source of variability in cognitive evolution, by promoting more divergent ideas and new ways of thinking.

An entrepreneur is building a “DMT machine” to allow communion with aliens. He is looking for tens of thousands of dollars of funding.

1P-LSD will possibly be illegal in Germany soon, following advice from independent experts to the government. Translated on our forum by a German member.

Our previous podcasts on the issue of drug policy: