How Psychedelics Improve Your Meditation (And Much More…)

Vincent Horn is a meditation and awareness expert, and created the popular Buddhist Geeks podcast. He talks to us about his new teaching platform (meditate.io), and explains how meditation can help us reach balance in our lives. We hear about Vince’s psychedelic experiences, and the parallels he sees between meditation and psychedelics. 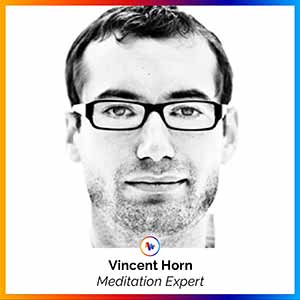 Although Vince has been teaching meditation techniques for years, he and his wife have decided to begin sharing all their knowledge through the platform “meditate.io”. It gives people access to a huge variety of different meditation and awareness practices, and saves you having to go to a meditation retreat to actually learn new things.

Vince’s philosophy for meditation is that it’s a technique that has to be used with focus, intellectual discernment, and an awareness of modern problems. Unlike the New Age movement, which Vince sees as a meaningless ‘soup’ of philosophies and practices, modern meditation needs to be streamlined and adaptable.

Vince’s journey into psychedelics is interesting – he was initially a straight-edge meditator, and although he had experienced altered states in his practice, had never tried a psychedelic. Through his meditation he became more open to the idea of substances that could assist his exploration of consciousness. While living in Colorado, he experimented with psychedelics.

He found that psychedelics could be used in a similar way to meditation, in order to explore the mind and existence. By setting an intention, and creating an environment similar to meditation, he found he learned some things through psychedelics that his meditative practice hadn’t.

Vince says that the visual experience of psychedelics was very different to that of meditation. Psychedelics allowed him to feel connected to his human ancestry, and gave him an ego death experience that shook him more fundamentally than any ego death he’d experienced with meditation.

He warns, however, about the power of psychedelics – one experience made him “go crazy” for several days. He would slap a warning label on both psychedelics and meditation, describing them both as trial by fire. He describes psychedelics as a “crash course in impermanence.” Learning about the true nature of reality can be highly uncomfortable for unprepared people.

When asked about why the meditation community can often seem hostile towards psychedelics, Vince gives a rational answer. He thinks that meditation is the ‘drug of choice’ for many traditions, religions and people. For example, Buddhism has refined meditation to such an extent that they don’t need psychedelics to further their minds.

Finally, Vince talks about the need for pragmatism when it comes to psychedelics. They have benefits, for sure, but aren’t a miracle cure and won’t solve the world’s problems by themselves.

Paul’s appearances in media this week: Article in the Willamette Week, Article in VolteFace Magazine, Article and Video Feature in NOS.

Nick Sand, pioneer of LSD manufacturing and featured in the documentary “The Sunshine Makers,” passed away on the 24th. This essay of his on DMT is worth a read.