How To Build A Psychedelic Community

We’re joined by Ashley Booth of the Aware Project, a psychedelic community based in Southern California. Ashley tells us about a transformative experience with 5-MeO-DMT that changed her from an agnostic to a believer, and prompted her to quit her job as a scientist and pursue a career in psychedelic therapy. We talk about the difficulties in setting up a psychedelic community, and what we can do to “Find the Others.” 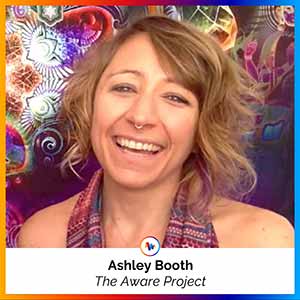 The Aware Project is an organization based in LA that brings together the psychedelic community in Southern California. They arrange a wide range of events and bring in expert speakers on an almost weekly basis. In just over two years, the Aware Project has organised over fifty events and is now one of the largest psychedelic communities in the world.

Ashley Booth founded the project through an unusual route. Initially a professional biologist, Ashley went to Burning Man after college and had a profound experience with MDMA, which opened her up to a new way of being, and gave her a new sense of community.

After going to Burning Man every subsequent year, Ashley had an experience with 5-MeO-DMT, a natural psychedelic secreted by the Bufo alvaris toad, that changed her life completely. The intensely mystical and spiritual experience changed her personality to be less materialistic and more balanced, and turned her from an agnostic to feeling connected to something greater than herself.

She decided to quit her job in science and to pursue a Masters in social work, with an aim of becoming a licensed therapist. She currently works with MAPS in their LA trials of MDMA for the treatment of PTSD.

Her experience with 5-MeO-DMT also prompted her to create the Aware Project, and foster psychedelic community in LA. She was surprised to find that there was no coherent psychedelic community anywhere in Southern California, so took it upon herself to start organizing large events that anyone could join.

Ashley’s transition from scientist to therapist is simply inspiring. She sums up her motivations by saying that we’re not going to be able to heal animals or the environment before we heal people. And she believes that psychedelics may be the best healing tools we can imagine.

The University of Hertfordshire Survey on Ketamine and ‘New Psychoactive Substances’ – open to all!

The BBC’s recent coverage of the microdosing phenomenon