We welcome Lex Pelger, host of Psymposia, a platform for psychedelic discussion. Lex talks to us about his new book, which explores the medical potential of cannabinoids through a creatively illustrated Moby Dick metaphor. We talk about the importance of sharing our own personal psychedelic stories in turning the tide for the psychedelic revolution, and consider what a psychedelic future might look like. 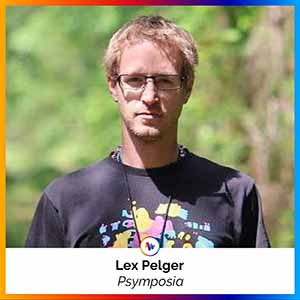 Lex’s new book, “Anandemide; or, the Cannabinoid,” is a graphic novel series about the endocannabinoid system and how it can be used for medical benefit. Lex wanted to tell an interesting story about the boring science behind medical cannabis… so decided to create a Moby Dick metaphor with the help of illustrators and anecdotes.

When it comes to psychedelics, Lex thinks they will be rolled out by pharmaceutical companies in the same way that cannabis has been – with reluctance, and on the back of huge medical and political U-turns.

Lex sees an ideal psychedelic future as one where pharmaceutical companies or government don’t have control over exactly how we take them. The ideal society would allow psychedelics to be consumed within communities, with adequate support and guidance, allowing us to combine the advice of our elders with our knowledge of science.

We talk about Psymposia’s upcoming Blue Dot Tour, which allows psychedelic enthusiasts across the country to share their experiences, good and bad. Lex describes some of the more memorable stories he’s heard over the years, including someone sitting in a nest of ticks while tripping on mushrooms…

Finally, Lex points out that some people don’t like cannabis or psychedelics. And that’s great! Lex thinks that people should be free to find whatever substance gets them “to the top of the mountain.”