Our guest for this episode of The Third Wave Podcast is Mike Margolies from Psymposia, an events group and digital magazine focused on psychedelics and drug policy reform. Mike talks about how Psymposia organises a platform for people to talk about their psychedelic experiences, and issues within the psychedelic community. We discuss the privilege still inherent in psychedelic culture when it comes to drug use and criminalisation, and what we can do to become a more diverse community. 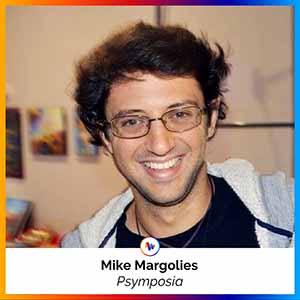 Mike Margolies is the Expansion Director at Psymposia. Psymposia’s signature event is a feature called “Psychedelic Stories”, which they run at conferences such as Horizons in New York and Beyond Psychedelics in Prague. In the segment, people from the psychedelic community can speak openly about their experiences. Mike believes this is a contrast to the typical presentations seen at these conferences, and helps to build a sense of community among psychedelic users.

Another example of content produced by Psymposia is their recent series on coming out of the ‘psychedelic closet’, likening the open discussion about personal psychedelic use to being open about sexuality. This series gathered opinions from opposite sides of the argument, and Mike believes that keeping a frank and balanced discussion open is an important part of developing the psychedelic culture.

Mike also brings up how people in the psychedelic community must also be mindful of their own prejudices about drugs. He believes that many psychedelic users would still believe myths about heroin, thinking it shouldn’t be decriminalised in the same way that psychedelics should be – but Mike points out that many heroin users are functional and the risks of heroin use are often relative to set, setting and dosage. If we are serious about reducing drug harms, we need to keep an open mind about all substances; and in the same way that we’ve learned the truth about psychedelics, we need to ignore the myths and prejudices associated with other drugs.

Since Psymposia is known for giving psychedelic users a platform to speak about their experiences in person, Mike tells us one of his psychedelic stories – his first experience with LSD. It was his first use of psychedelics, and he was fascinated to try them; however he found the experience underwhelming. He explored a museum with a friend, and noticed subtle changes in his perception – everything became more interesting, and had more meaning. He had expected intense hallucinations, which he didn’t experience. But he had a great time, and gained some insights into his life.

Mike mentions that he’s also had bad experiences with psychedelics, seeing the paranoid, schizophrenia-like side of things, and that we need to be aware of the risks of psychedelic use. This is why, Mike says, it’s important to maintain an open dialogue about our experiences. Minimising the risks will help us to use psychedelics as the healing tools they are.

We talk with Mike about the general stigma surrounding drug use, and how its origins are in the Nixon administration of 1968. From the mouth of one of Nixon’s top aides:

“The Nixon campaign in 1968 […] had two enemies: the antiwar left and black people […] but by getting the public to associate the hippies with marijuana and blacks with heroin, and then criminalizing both heavily, we could disrupt those communities”.

The war on drugs has resulted in the US having more prisoners than China and Russia combined, Mike says. Although drug policy has become more progressive, especially with the legalization of marijuana in several US states, it’s still harming minorities at a disproportionate rate. Mike tells us we need to be aware that, even though marijuana is legal to sell in Colorado, minorities are still being imprisoned for black market trade at disproportionate levels because they do not have the same opportunities and privilege that many others do. There’s still a lot of work to be done to break free from a drug policy that unfairly targets minorities.

Mike argues that we need to keep fighting for our basic freedoms, especially in our current conservative climate. We can’t rely on the FDA or the government to determine what substances we can put into our bodies and how – it should always be our fundamental freedom to use relatively harmless substances in responsible contexts. As Martin Luther King said, “The arc of the moral universe is long, but it bends towards justice”.

Finally, Mike talks about the upcoming Psymposia event at April’s Psychedelic Science conference in Oakland. Psymposia will be hosting a “Psychedelic Stories” event and may also be recording some live podcasts. Psymposia will also soon be releasing an interview with Duncan Trussel, and will be publishing pieces about the globalization of ayahuasca and the growth of psychedelic societies around the world.

Psymposia are running a Patreon campaign – so if you want to see more great content and events, consider becoming a Patron!