Drugs In The Bible

Our guest is Reverend Danny Nemu, historian and author. He talks to us about drugs in the bible – and how priests used them to induce divine visions. It’s surprising how many natural substances mentioned in the bible are psychoactive, and were almost certainly used for their mind-altering properties. We also discuss how drug stigma has changed since biblical times, and what it means for the future of psychedelics. 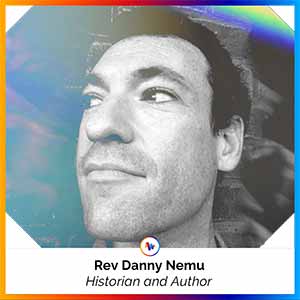 Danny begins by talking about an example of potential mass hallucination in the bible; the revelation at Mount Sinai. The descriptions of synesthesia (seeing the voice of God etc.) at this point in the bible are remarkably similar to a psychedelic experience – and Danny lays out the evidence that suggests it could be due to the mass ingestion of ergot, which is known to have psychoactive properties.

From this example of potentially mass psychedelia, Danny proceeds to describe other drug use in the bible; saffron, cinnamon, myrrh, nutmeg, cannabis… all familiar names, and all of them with psychoactive properties. They were often used in oils or rubs that were part of sacred rituals.

Danny next tells us about the tabernacle – a type of building discussed in great detail in the bible. It held a room specifically for priests to become surrounded by hallucinogenic smoke, which they would enter after ingesting an unknown cocktail of psychoactive plants.

Interestingly, the God described in earlier parts of the bible is certainly not one of zen-like calm and oneness. He is fierce and possessive – and Danny mentions one modern account from someone who took nutmeg and myrrh together, and ended up encountering a malevolent God, very similar to the one described in these early biblical passages. Perhaps, says Danny, these substances are responsible for unflattering descriptions of Yahweh.

Having said that, Danny makes it clear that drugs are not the only route to God – or that God is merely a hallucination produced by substances. He gives the example of a short-sighted person putting on glasses – just because the glasses allow them to see objects, doesn’t mean that the objects they see are products of the glasses.

Finally, we discuss the modern puritanical stigma surrounding drugs, despite the obvious drug use in the bible. Danny points out that there have always been restrictions surrounding drug use – such as only priests being allowed access to holy substances. Prophets would often come into conflict with authority when they broke these rules and experienced their own divinations. Danny likens this to our modern culture, where scientists are often in conflict with our leaders.

Danny isn’t sure about the future of psychedelics. While he would love them to be more popular, he is also averse to the messianic nature that they seem to promote in some people. He thinks it’s best to lead by example instead of pushing a pro-drug agenda: just live a happy, compassionate life, and when people ask you what your secret is… open up pandora’s box of psychedelics.