The Potential Of Psychedelic Therapy

Our guest is Dr Neal Goldsmith, psychotherapist and author of “Psychedelic Healing: The Promise of Entheogens for Psychotherapy and Spiritual Development”. We talk about how psychedelics can be used to break open the outer shell of our acquired personalities, and reveal the primal self inside. 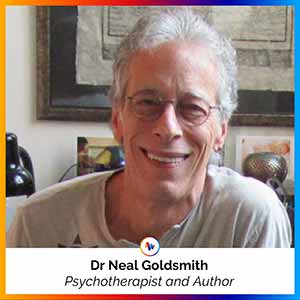 Clearly psychedelics have had a big impact on Neal’s work and life, so he begins by telling us about his experiences. Although he took LSD in college, he didn’t particularly gain anything from it, as it was not taken in a particularly spiritual context. However, some years after college he decided to try it again (through a partner’s interest in MDMA), and this time it changed his life. It was an introspective and transformative experience, leading to his interest in psychedelics as therapeutic tools.

Neal’s personal breakthrough came as he realised that our personalities begin as flexible and adaptable when we’re young, but are set into a defensive shell as part of growing up. Psychedelics helped Neal see that this outer shell of personality could be broken to reveal a more primal, original form of self that is a truer reflection of identity. Later studies in the changes of personality traits reinforce this view that psychedelics can change our personality, even after it has set into the defensive shell of adulthood.

Although psychedelics are a powerful and reliable tool for producing positive changes in people, Neal believes the end result is more important. Facilitating a change towards awareness and maturation is something that psychedelics do very well; but it’s something that we also need to focus on as the end goal regardless of the way we get there. “We shouldn’t mistake the tool for the task,” as Neal says.

Neal discusses with us the stigma associated with drug use, and how some people may never approve of the use of psychedelics in achieving spiritual development, seeing them as a kind of “cheat” or “shortcut”. Neal believes that LSD is the most powerful pharmaceutical drug developed by humans – but also the most powerful spiritual sacrament. He says that the distinction between the two is spurious, and we must learn that these are just two different perspectives on the same thing.

Next, we talk to Neal about the future. In the information age, it’s unlikely that this Third Wave of psychedelics will fade away in a similar way to that of the 60s and 70s. As long as we keep talking about psychedelic research and spiritual development, psychedelics will always be in the public eye. But Neal believes that we are still a long way from being a totally open and accepting society – likening our culture to a two-headed animal, one part progressive and one part holding back. Although sometimes one of the parts is more correct than the other, they’re both needed for a balanced society.