How To Have A Really Good Day With Psychedelics

Our guest is Ayelet Waldman: author and legal expert who recently published “A Really Good Day”, an account of her experience with microdosing. In her book she reports that a month of LSD microdoses improved her life in many ways, and she argues for the decriminalisation of drugs and for the therapeutic potential of psychedelics. We talk to her about her experiences and the future of drug policy around the world. 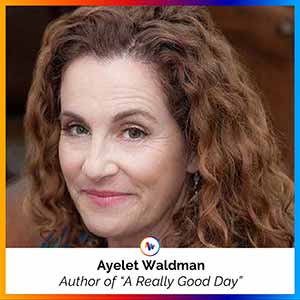 On the back of the publication of her new book, “A Really Good Day”, Ayelet has faced a barrage of media interest. She believes that this is because of a resurgence of interest in the potential of psychedelic drugs in therapy – modern pharmaceuticals just aren’t healing people in the way they should. More people are becoming interested in psychedelics as a way of healing themselves without nasty side effects, prohibitive expense or impractical dosing regimens.

Ayelet talks to us about her experience in teaching a seminar on the war on drugs; and how drug policy has always been about subjugating groups that threatened the power balance. She believes that with the new regime in the US, we might see a reversion to old scapegoating tactics. Jeff Sessions, the new attorney general, has made clear that he will crack down on marijuana use. Ayelet expects to see legal marijuana dispensaries being raided and people going to prison under federal laws.

Considering the chance of a crackdown on drug use in the near future, is Ayelet worried that she will be targeted for publicising her drug use? She believes that although she hasn’t committed an actionable crime, she could be prosecuted in the new regime. But, she points out, her fears are nothing compared to the terrors faced by immigrants or minorities. Ayelet believes that as a privileged person, she has the responsibility to speak out about her beliefs in the powers of psychedelics, where other less fortunate people cannot.

Although the new government in the US could quite possible set drug reform back decades, Ayelet has greater hopes for the rest of the world. Citing examples such as past US intervention in UK drug policy, Ayelet hopes that a growing lack of credibility of the US government will allow other countries to become more progressive.

When it comes to the increasing trend of microdosing in Silicon Valley, Ayelet is optimistic, but worries that it could enforce unhealthy lifestyles. The reason that many business people are microdosing is because they are obsessed with becoming better at their work. Ayelet hopes that microdosing will lead people towards a spiritual fulfilment that will help them in their lives, rather than just their work.

Finally, Ayelet talks to us about her psychedelic fantasy – a beautiful psychedelic spa (with a sliding pay scale) where trained counsellors can guide you through a psychedelic experience in a measured, safe environment. Although MAPS is hoping to develop such a centre, it may be some time before such a place exists. Ayelet will have to wait for now. But until then, she believes that psychedelics need to be decriminalised as fast as possible, to allow for the end to pointless incarcerations and for psychedelic therapies to be available to everyone.

Episode 63 The Future Of Psychedelics: Medicalization, Microdosing, And The Mainstream Will Siu
Episode 55 What Does A World-Class Fitness Coach Have To Say About Microdosing? Ben Greenfield
Episode 54 What Is The Optimal Setting For Microdosing? Tao Lin
Episode 49 Encountering Your Shadow Side With Psychedelics James W Jesso
Episode 47 Why Microdosing Requires A Cautious Approach Ingmar Gorman
Episode 41 What Happened To The First LSD Researchers? Erika Dyck
Load more podcasts