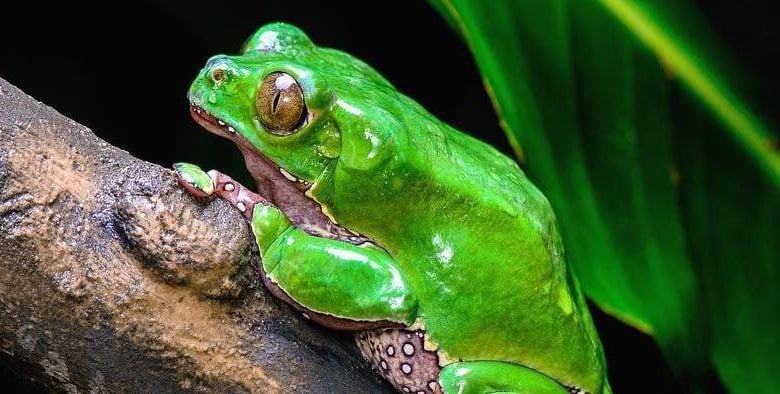 The phyllomedusa bicolor is a fascinating creature—also known as the giant leaf frog, the giant monkey frog, or the giant waxy monkey tree frog, this Amazonian amphibian has earned its swath of aliases due to a unique set of characteristics.

Like other frogs under the phyllomedusa genus, the bicolor is a tree frog, and spends most of its life in trees. Because of that habitat, the frog moves by swinging like a monkey, instead of hopping on the ground. These giant monkey frogs are also the largest in the phyllomedusa family.

Though they only grow about four to five inches, their squat and angular shape makes the “giant” part of their name a fitting description. These giant waxy tree frogs are one of several frogs in the phyllomedusa family that produce a waxy secretion, which they spread over their bodies to stay hydrated and protect their skin from sunlight.

The waxy secretion is useful to more than the giant monkey tree frog, though. Some cultures revere the phyllomedusa bicolor for its secretions, which are used medicinally to heal and promote strength in a ritual known as a kambo ceremony.

Kambo and the phyllomedusa bicolor

Kambo refers to the secretion from the giant waxy monkey tree frog. The practice of harvesting and applying it to humans in ceremony is an entrenched practice in some indigenous cultures in South America. They use kambo to treat illnesses as well as mental and spiritual difficulties, and to assist in hunting by providing a boost of energy and clarity.

The process of obtaining kambo is straightforward. First, the giant monkey frog is caught and tied up by its limbs. Once the frog is rendered inert and begins secreting kambo, that secretion is scraped off with a stick and allowed to dry. After the kambo is obtained, the frog is released.

For the ceremony, the dried out kambo is mixed with water or saliva to form a paste which is applied to “points” on the skin. These points are small dots burned onto the skin so kambo can enter the bloodstream. Other than by points, there is essentially no safe alternative way to take kambo. There are anecdotal reports alternative methods of ingestion leading to overdose and “frog disease,” a condition that could lead to death. The method of applying kambo by points has been passed down as tradition, and there is little to no evidence that kambo is lethal when applied by a knowledgeable practitioner.

A shaman or kambo practitioner plays a crucial role in the ceremony, and often facilitates the experience with music, chanting, or other activities. One should strongly consider trying kambo in a controlled, ceremonial setting with an experienced guide. If self-applying, it is important to have experience burning and applying points and to be aware of the intense physical effects that result from using kambo.

Kambo is a challenging substance. The effects can come on almost instantly and include nausea, swelling, shivering, fever, and an increased heart rate. Purging is common, so the practitioner and occasionally dedicated assistants may provide buckets and support.

Kambo does not deliver psychedelic experiences, hallucinations, or altered states of consciousness. Thought and perception are only affected insofar as the intense physical changes influence them. Ultimately, kambo should be considered as a medicine, with the potential to treat physical and mental ailments.

After the purging and initial queasiness pass people can feel tired, but they may just as well feel energized and strong. People also report feeling relieved, peaceful, and content. Making it through the kambo experience is empowering, and part of the benefit come just from overcoming the challenge of getting sick and purging. Some of the uplifting effects might take more time to materialize, but in addition to heightened physical energy they can include mental focus, clarity, and improved moods.

How can I get kambo?

Kambo is a relatively unpopular substance that only comes from a specific region of the world. Obtaining it may be a challenge. Applying kambo is also complicated and potentially dangerous. An experienced practitioner is strongly recommended.

In recent years though, kambo has become increasingly popular and there are options globally to participate in a kambo ceremony. Apart from a ban in Brazil that outlaws its commercialization, there are no restrictions to use kambo in any country. For this reason, kambo is a popular choice for people looking to experiment with alternative substances that can be used for medicine and healing.

If you or someone you know is qualified to handle and administer kambo, the substance can be found and purchased online.

Should I just buy the frog?

Just as kambo is legal for purchase, it is legal to buy the phyllomedusa bicolor as a pet. Some people who are interested in using the frog medicine more than once may consider simply purchasing the frog, and harvesting the kambo themselves. There are arguments against this approach that should be considered.

First, keeping a giant waxy tree frog as a pet is not easy. The main challenge for an aspiring caretaker is recreating the Amazonian climate that the frogs have in their natural habitat. Phyllomedusa bicolors live in the rainforest, which means lots of trees, foliage, humidity, and varying temperatures. The frogs need space to climb and are used to a temperature gradient, so a large terrarium with different temperature areas is crucial.

Another challenge is recreating the bicolor’s diet, since the frog’s secretion may differ in captivity from its secretion in the wild. Though there is little research or conversation about this topic, at least one study has shown how frog secretions can vary significantly between captive frogs and wild ones[^1].
Even for a qualified kambo practitioner and an experienced amphibian caretaker, harvesting kambo from the bicolor may harm the frog by stripping it of its protective secretion. When caught in the wild, the giant waxy tree frogs may be marked so that they will not be harvested again too soon.

For anyone interested in the phyllomedusa bicolor and kambo, there is plenty to explore. The legality, the ritual and ceremony, and the intriguing waxy tree frog all result in an alluring package that represents alternative traditional medicine and healing.

Kambo from the giant leaf frog still leads to nausea, purging, and potentially other adverse side effects, though. People with certain contraindications should practice caution or altogether avoid taking kambo.

If you are considering harvesting kambo from a captive bicolor, there are some strong arguments against doing so, and plenty of options to instead purchase the substance or participate in a kambo ceremony. Just as the ceremonies and indigenous cultures emphasize, we should respect both kambo and the kambo tree frog as the powerful gifts of nature they are. 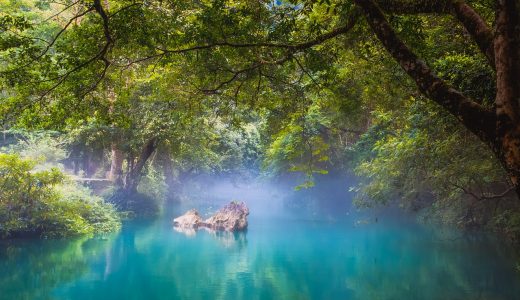 Kambo How to Prepare For Your Next Kambo Ceremony
Most kambo practitioners recommend fasting, minimizing recreational drugs and alcohol and drinking at least one gallon of water before the ceremony.
Third Wave · June 26th, 2019
Load more posts