Psilocybin Benefits: Magic Mushrooms & How They Can Help

Psilocybin is the active ingredient found in magic mushrooms, colloquially known as “shrooms”. These hallucinogenic fungi can be cultivated indoors or harvested in the wild. Alternatively, the chemical compound of psilocybin can be isolated and synthesized in a lab setting, separate from its external mushroom structure.

Around the world, over 200 different species of magic mushrooms exist, such as Psilocybe cubensis (the most commonly known species), Psilocybe semilanceata (“Liberty Caps”), and Psilocybe azurescens (“Flying Saucer Mushrooms”). A classic tryptamine hallucinogen, psilocybin induces shifts in sensory perception and consciousness when ingested, with effects lasting up to six hours. The mind-altering properties of psilocybin have been linked to positive health outcomes, such as reduced depression and anxiety and improved mood.

Brief History of Psilocybin & Where We Are Now

In some cultures, psilocybin has long been used for ceremonial, spiritual, and healing purposes. Huautla de Jiménez, a town in southern Mexico, is home to the indigneous Mazatec community and known for the ritualistic consumption of psilocybin mushrooms.

In 1955, American banker and ethnomycologist R. Gordon Wasson travelled to Huautla de Jiménez, where he convinced María Sabina, a renowned local healer, to conduct a magic mushroom ceremony for him.

Two years later, Gordon published an account of the event in ​Life ​magazine. Though he did not name the exact town, word eventually got out about the magic mushroom capital of Mexico. Psilocybin samples were shipped from the mountains of southern Mexico to labs in the United States. The term “magic mushrooms” officially entered into mainstream Western culture. Public interest and research on psilocybin grew, contributing to the psychedelic counterculture movement of the 1960s.

Shortly after, the 1970s War on Drugs led to the prohibition of psilocybin in the United States. Psilocybin became classified among the Schedule I Controlled Substances, defined by the FDA (Food and Drug Administration) as having “no currently accepted medical use and a high potential for abuse.”

Amid the modern-day psychedelic renaissance, research on magic mushrooms is newly underway, and misinformation and stigma surrounding psychedelics is fading. In this article, we discuss the potential benefits, as well as potential risks, of psilocybin as shown in clinical research. 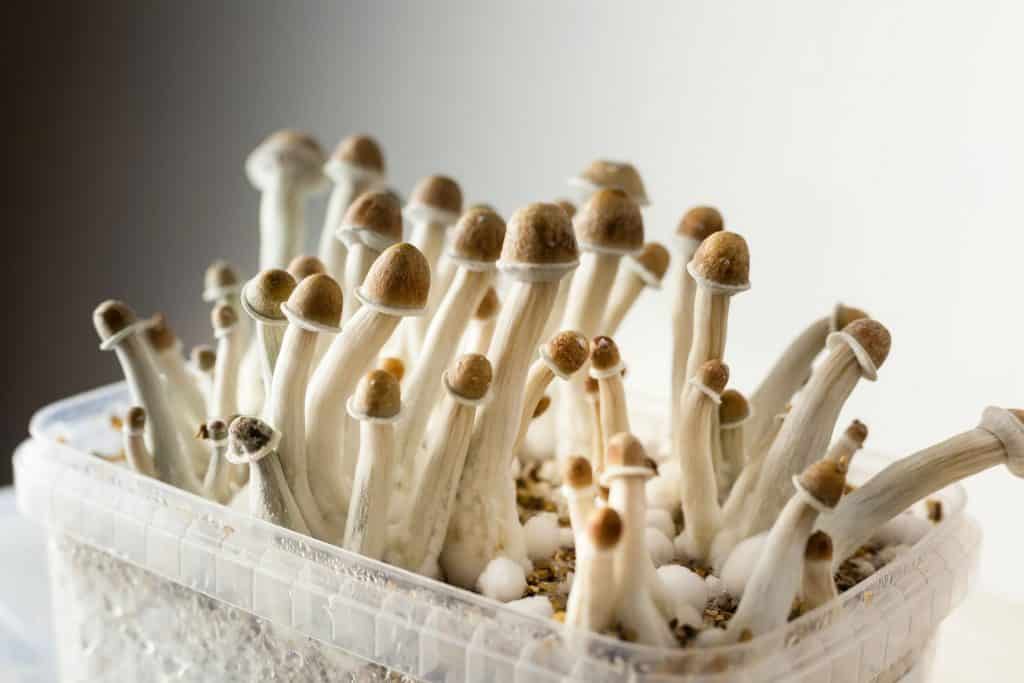 A 2014 study by Johns Hopkins University examined the effects of psilocybin on a group of individuals who had repeatedly tried but failed to quit smoking. Each person was administered three doses of psilocybin over an eight week period.

The psychedelic sessions took place over several hours within a comfortable, monitored setting, with music that allowed participants to focus on their inner experience. In addition to the psilocybin doses, participants received weekly cognitive behavioral psychotherapy sessions, which taught them techniques to maintain their smoking cessation goals.

It is hypothesized that psilocybin can help disrupt and rewire the mental pathways underlying addiction. The study results supported this hypothesis: Six months after treatment, 80% of participants had managed to remain abstinent from smoking. In comparison, the six-month abstinence rate following other smoking cessation treatments, such as nicotine replacements and cognitive behavioral therapy, is less than 30%.

For longtime smoker Carine Chen McLaughlin, the habit-breaking effects of psilocybin were immediately apparent. Shortly after a guided psilocybin session, she finally managed to end a 40-year relationship with smoking. “My hand would not let me touch that cigarette,” Chen-McLaughlin recounted in an interview with NPR. “To this day, if you paid me a million dollars to touch a cigarette with my hand, I cannot.”

To clarify, psilocybin is not a magic pill that automatically eliminates addiction. Rather, psilocybin treats addiction by creating new neural connections that have the potential to override old tendencies. The introspective nature of the psychedelic experience invites the individual to explore the root issues that contribute to their addictive behavior.

“Quitting smoking isn’t a simple biological reaction to psilocybin, as with other medications that directly affect nicotine receptors,” says Matthew W. Johnson, PhD, professor of psychiatry and behavioral sciences at the Johns Hopkins University School of Medicine. “When administered after careful preparation and in a therapeutic context, psilocybin can lead to deep reflection about one’s life and spark motivation to change.”

A 2018 study conducted fMRI scans on individuals with treatment-resistant depression before and after they underwent two guided psilocybin sessions. The day after treatment, individuals exhibited heightened activity in the right amygdala of the brain. This neurochemical shift translated to increased responsiveness to images of both fearful and happy faces. Enhanced emotional responsiveness, in turn, correlated with decreased depressive symptoms one week post-treatment.

Study participants demonstrated “a greater willingness to accept all emotions post-treatment (including negative ones).” The ability to tolerate a range of emotional stimuli appears to be essential in combating major depressive disorder. Rather than avoiding difficult feelings, individuals under the influence of psilocybin are invited to confront and integrate them.

Following the study, one participant stated, “I have felt a sense of acceptance; more acceptance of agony, boredom, loneliness.” Another individual reported “a willingness to try to accept the negative times—but also an appreciation of the wonderful times.”

Other neuroscience research, such as this new study by Imperial College London, further explores the role of psilocybin in enhancing well-being. “Psilocybin may be giving these individuals the temporary ‘kick start’ they need to break out of their depressive states,” says Robin Carhart-Harris, Head of the Center for Psychedelic Research at Imperial College London. “Imaging results do tentatively support a ‘reset’ analogy.”

A single large dose of psilocybin can help decrease anxiety in patients with life-threatening illnesses, according to the results of a 2016 study published by Johns Hopkins University and a similar 2016 study by the New York University Langone Medical Center. Both studies were conducted in a double-blind and placebo-controlled setting. The psilocybin sessions were facilitated by trained clinicians.

70% of cancer patients in the JHU study described the experience as one of their top five spiritually significant life events. Profound insights, mystical experiences, and feelings of peace and interconnectedness were common themes for participants across both studies.

‘There’s a sense of humbling that comes out of having that experience,” says Roland Griffiths, PhD, professor in the departments of psychiatry and neurosciences at the Johns Hopkins University School of Medicine. “It really is a sense of astonishment at the largeness of the project, and a sense of gratitude that comes out for being gifted this opportunity to be this sentience, highly evolved human creature, walking the face of the earth, and we find ourselves with this astonishing fact that we are aware that we’re aware.”

It appears that psychedelic drugs can help to ease cancer-related anxiety and offer meaning and optimism for those confronting their mortality. The link between psilocybin consumption and reduced anxiety has been observed in healthy volunteers as well. In particular, psychedelic microdosing is an effective way to relieve anxiety and shift the brain toward healthier emotional patterns. 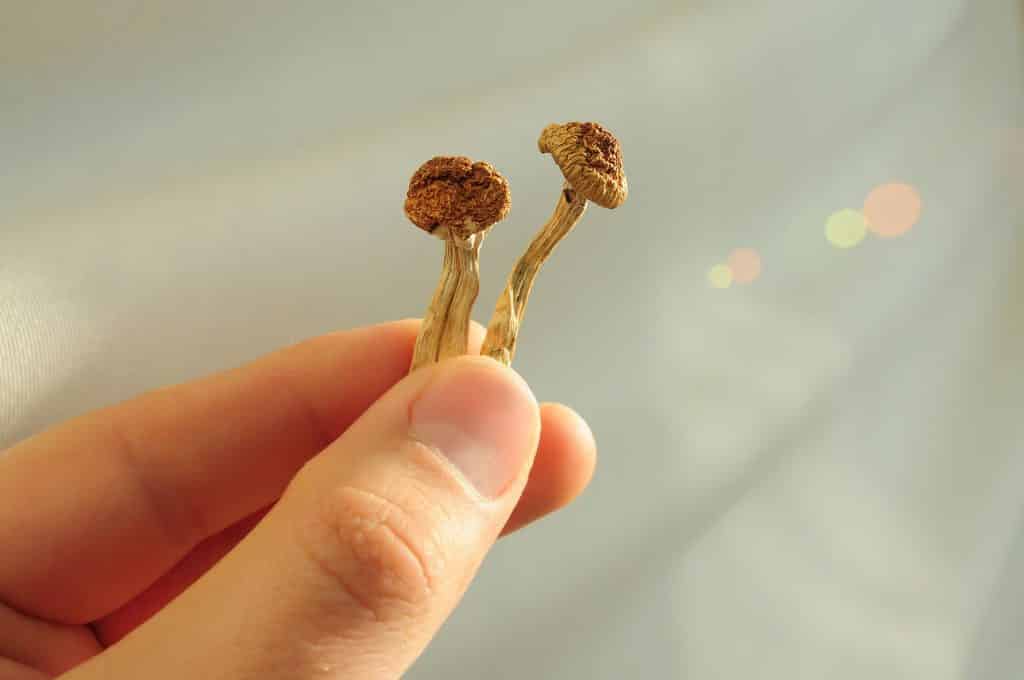 Microdosing magic mushrooms can enhance cognition, creativity, and mental flexibility. A 2018 study examined the effect of psychedelic microdoses on 36 individuals who were attending an event by the Psychedelic Society of the Netherlands. Each study participant consumed, on average, 0.37 grams of dried psilocybin-containing truffles—which, as the underground counterpart to magic mushrooms, are legal in the Netherlands.

Following the microdose, the study participants displayed better convergent thinking (the ability to identify a single solution to a problem) and divergent thinking (the ability to identify many possible solutions). Researchers noted that individuals became “more fluent, flexible, and original in the possibilities they came up with.” Psilocybin brings different regions of the brain into communication with one another, leading to a hyperconnected brain with enhanced creative and cognitive abilities.

Preliminary research demonstrates the therapeutic potential of psilocybin to treat a range of psychiatric disorders, from obsessive-compulsive disorder to alcohol dependence to post-traumatic stress disorder. Psilocybin promotes neurogenesis—the growth of new brain cells—in the hippocampus, the part of the brain associated with memory and learning. As a result of neurogenesis, increased neural connections become possible, and the brain enhances its capacity to rewire old and maladaptive cognitive patterns—the root of various mental disorders.

This neurogenesis-induced “rewiring” mechanism was observed in a 2013 study, in which mice injected with psilocybin overcame their conditioned fear response faster than the control group. Mice who were given low doses of psilocybin were able to “reset” their memories more quickly, such that a previously fear-inducing stimulus (a sound paired with an electric shock) was no longer perceived as threatening shortly after the stimulus (the sound) was separated from the fear trigger (the electric shock). Based on these findings, researchers hypothesize that psilocybin can help to rewire the fear conditioning that underlies PTSD.

Psilocybin is not associated with significant adverse side effects when consumed in a comfortable, supervised, and supportive setting, as demonstrated by a data analysis of eight different psilocybin studies from 1999 to 2008. Outside of a monitored research context, the potential risks of psilocybin may vary—which is why it is essential to educate oneself on proper dosing, set, and setting.

The few adverse reactions that have been documented in clinical trials were resolved quickly and did not lead to long-term negative effects. In most cases of psilocybin-related fatal case reports, other substances (alcohol, heroin, and cannabis) were also involved. Psilocybin itself has a low potential for dependence or abuse, as well as low chronic toxicity levels. Individuals with a history of psychosis are advised to avoid high doses of psilocybin and other psychedelic substances, such as LSD, MDMA, and DMT.

High doses of magic mushrooms may induce significant fear or paranoia in healthy study participants, though this occurs in a small minority of cases. The use of psilocybin in low or moderate doses poses little to no risk.

Where To Go From Here

Until psilocybin becomes more widely legalized and psychedelic-assisted therapy becomes more accessible, those looking to experience psilocybin may benefit from a self-administered microdosing regimen. Microdosing is an effective way to engage with low doses of a psychedelic substance, such as LSD or magic mushrooms. Experiencing the medicine in small increments reduces the likelihood of a “bad trip”, and allows people to conduct everyday life activities without significantly altering their state of consciousness.

If you’d like to learn how to use psychedelic microdoses to elevate your mind, body, and spirit, check out Third Wave’s Microdosing Course. This will guide you through the basics—then dive much deeper, helping you tailor your routine to meet your personal goals.

Psychedelic retreats are another great option if you want to experience plant medicine in a legal, and intentional way. Find a list of vetted retreat centers offering psilocybin ceremonies worldwide.