Ayahuasca in the Grieving Process

Our guest is Ismail Ali, Policy Fellow at MAPS. Ismail helps develop sensible drug policy that will create alternatives to the failed war on drugs. He talks to us about his experiences with psychedelics, including an ayahuasca experience with his family for the purpose of coping with personal tragedy. We talk about psychedelics, family and drug policy in the US. 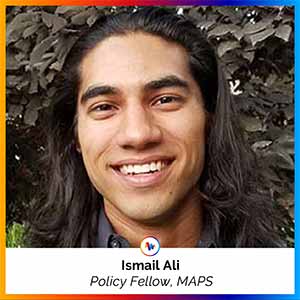 Ismail works for MAPS as a Policy Fellow, guiding the development of policies that will hopefully reverse the damage done by the war on drugs and promote basic human rights. Here, he tells us what made him decide to enter a career in drug policy, and how his experiences have influenced his view of psychedelics.

After Ismail graduated from Berkeley Law School in 2016, he decided to spend several months touring psychedelic festivals and conferences. Starting with the Boom festival in Portugal, Ismail volunteered for Kosmicare, a harm-reduction service similar to MAPS’ Zendo project. Following this experience, he visited several psychedelic conferences, including Beyond Psychedelics in Prague, Horizons in New York and the World Ayahuasca Conference in Brazil.

Ismail says that even though many scientists were presenting their research on psychedelics at these conferences, they were often unable to talk about their personal experiences. Ismail believes this is a symptom unique to psychedelics; in most other fields, it’s considered unusual for a researcher to not be totally familiar with their subject. For example, nutrition researchers aren’t expected to abstain from nutritious food. Ismail hopes that as legalisation of psychedelics for medical use comes closer, scientists will have more freedom to discuss their personal experiences.

We then hear about Ismail’s own unique personal experiences with psychedelics, most importantly a family journey to an ayahuasca retreat. His family decided to undertake a family ayahuasca experience to help in coping with the loss of his mother, which was devastating to the whole family. The experience did not totally heal everyone of the pain, but instead provided another tool that Ismail and his family could use to help overcome the loss.

Ismail believes that it may be tough for people to convince their family to have a psychedelic experience together, and with current stigma around psychedelics, it may require some outside motivator. However, Ismail agrees that the first step is honest discussion with your family about psychedelic use, without trying to convince anyone or push an agenda.

Finally, Ismail talks about the uncertainty in the future of US drug policy. The new administration has a lot of people worried, and could change the way researchers can obtain licenses. Ismail leaves us with the note that mental health services in the US are a big issue, and we need to reduce mental health stigma to allow people to find new ways of self-healing.