Legal Status Of LSD And 1P-LSD

LSD, commonly known as acid, scientifically known as lysergic acid diethylamide, is one of the most abundant and potent semi-synthetic psychedelic substances. It can cause a wide variety of effects, from wild sensory distortions and intense open-eyed hallucinations and closed-eyed visualizations through atypical mental associations to feelings of spirituality and connectedness to everyone and everything. While LSD is illegal in most parts of the world, you may have an opportunity to find a legal LSD substitute.

LSD is infamous as a party drug that can induce a dissociative state in users and, at times, send them off into a full-blown panic attack. On the other hand, it’s also famous as a source of inspiration to many of the popular artists of the ‘60s and ‘70s.

Lately, it’s become a staple substance of the third wave of psychedelic use, providing a whole subculture of microdosers with a boost in productivity, focus, and creativity, to name a few of the reported and well-documented benefits. Steve Jobs stands, of course, as the most well-known advocate of the benefits of using LSD for business innovation and visionary thinking.

Legal Status of LSD Around the World

As you can assume, possessing a highly potent psychedelic such as LSD is largely unlawful throughout the world. The degree of how illegal it is, and how strictly the law is enforced, though, varies. Except for a handful of countries where having LSD on you is legal, decriminalized, or otherwise not punishable (colored red in the chart), possessing just a bit of this substance can land you in prison for a substantial amount of time. This is why, at Third Wave, we receive many requests for information about a legal LSD substitute. 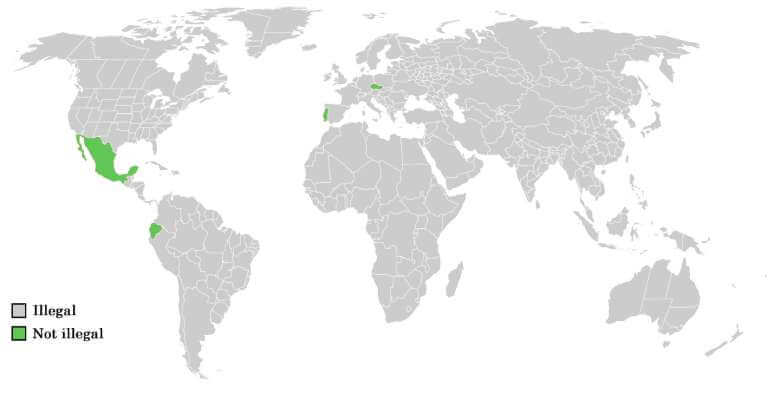 Here’s the breakdown of LSD legality in some major parts of the world and the handful of outlier countries:

Select Countries Where LSD Is Illegal

Is LSD Illegal in the United States?

LSD is classified as a Schedule I controlled substance in the United States. It is therefore illegal to manufacture, possess, buy, sell, or consume LSD in any form.

A brief history of LSD and the law

If we want to know why most of the world is against a substance that has no addictive properties, promotes the growth of neural cells, and may have important therapeutic potential, we need to look into its history.

LSD was first synthesized from ergot (a fungus that attacks rye) in 1938 by Swiss chemist Albert Hofmann. He was studying derivatives of lysergic acid and creating novel compounds in order to test for any medicinal properties. He synthesized the diethylamide (he called it LSD-25) and moved on, noting only that “the experimental animals became restless during the narcosis” and that the substance itself has no pharmacological value.

Five years later, Hofmann re-synthesized the compound and sent it in for further testing. During this process, a drop of the liquid made contact with his skin, and soon caused him to perceive “extraordinary shapes with intense, kaleidoscopic play of colors.” Three days after that, he administered himself 0.25mg of LSD (or, as ethnobotanist and psychonaut Terence McKenna would call it, a heroic dose), and saw exactly how powerfully this substance can influence one’s consciousness.

Mass adoption ensued in the decades following the publicizing of the psychedelic properties of LSD. The US army started testing its value in psychological warfare, as a tool for torture, mind control, information gathering, and as a chemical weapon on the battlegrounds. The hippie counterculture movement of the 1960s, on the other hand, embraced it as a means of consciousness expansion, artistic inspiration, and an all-out catalyst of peace and love.

Psychiatrists started researching its potential in healing mental disorders and substance abuse issues. Their research showed promise but ultimately fell short in the ‘60s, struggling to fulfill the 1962 scientific methodology amendments to the FDCA regulations. As an adjunct to psychotherapy, LSD was also used with success, but similar methodological problems, as well as the association of its use by hippies, pushed this research to the margins of acceptable science, until its eventual prohibition.

Why Is LSD Illegal?

Aside from coinciding with a movement aimed at opposing the government, by the ‘60s there had already been a substantial amount of bad press floating around pertaining to the use of LSD. Hospitalizations following LSD trips, jumping out of windows or through window panes or even into oncoming traffic under the effects, etc. are a few examples of the grim image of LSD that was portrayed to the public. Of course, the substance itself is hardly accountable for these hazards, yet people will always find ways to get into trouble via reckless use.

Whatever the actuality, the government had enough bad press on its side to demonize LSD (as well as other psychedelics) and abolish the hippie movement.

Read More: The History of LSD: From Hero to Villain & Back Again

Is 1P-LSD a legal LSD substitute?

There are a few chemical analogs to LSD, the most well-known and available of which is 1P-LSD. In some cases, 1P-LSD may be considered a legal LSD substitute.

1P-LSD is structurally almost identical to LSD, and, according to anecdotal reports, the nature of the effects of the two are highly comparable, save for 1P possibly being only about 38% as potent as LSD. The big difference is that 1P does not succumb to the same regulations as LSD.

So, whether you’re interested in regular LSD or 1P-LSD will depend on your legal jurisdiction. Whichever you choose, ensure to follow your local laws as closely as possible. After all, the illegal nature of LSD is the most “dangerous” thing about it.

Third Wave’s Microdosing Course is an in-depth online course that will teach you all the ins and outs of microdosing, with a particular focus on how you can harness this cutting-edge technology to live a better life.

Learn about our microdosing courses