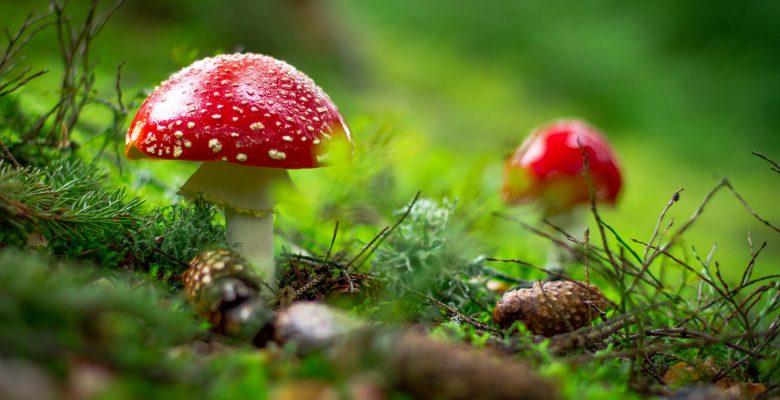 What do Santa Claus, urination, and fly catching have in common? If you said Amanita muscaria… you nailed it. This distinctive, red and white mushroom has a colorful history rooted in deep mythology and lore. (Not entirely surprising, given that it looks like something a princess would sit upon.)

Amanita muscaria—also known as Fly Agaric for its effective use in killing houseflies—has played an integral, traditional role in cultures spanning North America, Europe, and Asia since the 18th century. According to research conducted at the University of Portsmouth, “The first published account of the effects of Amanita muscaria on man was made by von Strahlenburg (1730), a Swedish colonel who spent 12 years in Siberia as a prisoner of war.” These accounts were later embellished and used by Oliver Goldsmith in his book, Citizen of the World. 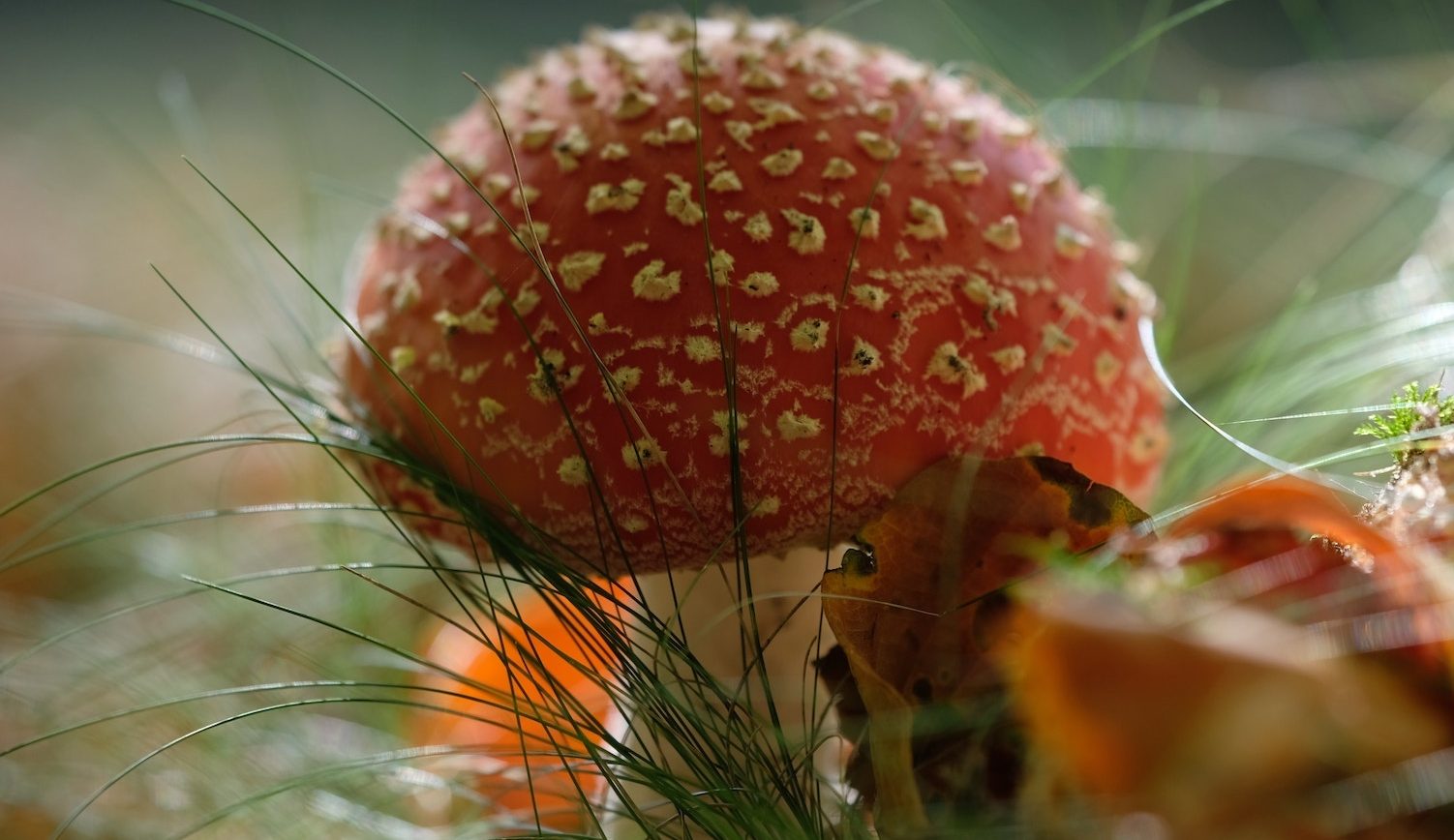 Through the 20th century, in literature and firsthand reports, there are descriptions of Amanita muscaria being used in shamanistic ritual; as currency;and as an explanation for Christianity. In the 1970s, a German botanist named Georg Wilhelm Steller noted that reindeer were inclined toward a. Muscaria. That in fact, they would easily become addicted, and as a result, their flesh would become intoxicating to all who ingested it.

In the Scandinavian Peninsula, the indigenous Sami people who resided in Northern Finland, had a longstanding tradition that persisted through the 19th century. As told in a recent article published in The Atlantic, the Sami people, “would wait in their houses on the Winter Solstice to be visited by shamans. These shamans would perform healing rituals using the hallucinogenic mushroom Amanita muscaria, a red-and-white toadstool fungus that they considered holy. So holy, in fact, that the shamans dressed up like the mushrooms for their visit.”

The story goes that these shamans, “would act as conduits between the human and the spirit world,” and through the a. Muscaria would bring “gifts of introspection.” They would also leave as they arrived, on sleds pulled by reindeer. Between this, the red and white aesthetic, and the emphasis on gratitude, it’s hard not to draw Yuletide comparisons.

So what is it exactly? What does this storied fungus contain? Unlike “magic mushrooms” which contain psilocybin, the psychoactive components of Amanita muscaria—ibotenic acid and muscimol—are far more unusual. There are only five plant species in the world, all of which are members of the agaric type, that contain these two particular amino acids.

According to the Erowid Center, a non-profit dedicated to collecting and disseminating information about psychoactive plants and chemicals, a medium/common dose of a. Muscaria is approximately three medium caps, or between 5 and 10 grams. A strong dose ranges from 10 to 30 grams. The onset is slower than psilocybin, it can take up to three hours, and the total experience lasts between 5 and 10 hours depending on the dosage.

Also unlike psilocybin, the effects of Amanita muscaria tend to be slightly less euphoric, and are generally more variable. In the first written observations of its effect, von Strahlenburg, the Siberian prisoner of war, noted that:

The first and usual sign by which one can recognize of man under the influence of the mukhumor [the Russian name for Amanita muscaria] is the shaking of the extremities which will follow after an hour or less after which the persons thus intoxicated have hallucinations, […] while some might deem a small crack to be as wide as a door, and a tub of water as deep as the sea. But this applies only to those who overindulge, while those who use a small quantity experience a feeling of extraordinary lightness, joy, courage, and a sense of energetic wellbeing.

The last sentence of von Strahlenburg’s description details the primary similarity between an Amanita muscaria trip and a psilocybin trip. Both tend to generate heightened sensory awareness, increased feelings of connectedness, as well as joyful lightness. In that sense, they’re both true entheogens.

Over the years, there has been some speculation and worry as to the toxicity of Amanita muscaria, even concern that ingesting it may be potentially fatal. Currently, there is no strong evidence to support this fear, and while a. Muscaria is technically poisonous (in the way that alcohol is poisonous), it can be safely consumed in controlled doses.

It should be noted that there are other members of the Amanita genus that are highly toxic and dangerous. As with any wild mushroom, caution is key.

Amanita muscaria can be (and has been) consumed in a variety of ways. Most remarkably, there are reports of the Koryak people in Siberia ingesting the urine of shamans who had eaten the mushroom. Ibotenic acid decarboxylates to muscimol in the process of digestion, and maintains the majority of its psychoactivity. The thinking was, in part, that this method would offer a safer, less toxic means for consuming the fungi.

Of course, that’s not entirely necessary today. There’s also tea, or tearing off little pieces of the cap and rolling them into pill shapes for gentle consumption. Either one of those options is probably easier, and more pleasant.

In terms of legality, according to the Erowid Center’s website, “Amanita muscaria (as well as all other Amanita species) is uncontrolled federally in the United States. This means all parts of the plant and its extracts are legal to cultivate, buy, possess, and distribute (sell, trade or give) without a license or prescription. If sold as a supplement, sales must conform to U.S. supplement laws. If sold for consumption as a food or drug, sales are regulated by the FDA.”

Unlike other mushrooms, the cultivation of Amanita muscaria can be especially tricky. The fungus has a deeply symbiotic, mycorrhizal relationship to its host trees. For this reason, unless there are birch trees in your backyard these fungi can be particularly difficult to grow. It is possible to collect the caps in sporination, crush, and mix them into top soil, but the process is not as straightforward or accessible as growing psilocybin mushrooms, for example.

According to renowned mycologist Paul Stamets, a. Muscaria continues to mature post harvest. Specifically, it possesses the capacity to “transform cap tissue into gills and spores, and reorient against gravity – [a process known as] negative geotropism.”

By virtually every measure, Amanita muscaria is not your average mushroom. From its color scheme, to its history, to its unusual growing process, it is one weird and beautiful little fungus.

Mushrooms How To Grow Your Own Mushrooms
We’ve put together an easy “how-to” on how to build your own personal fungi kingdom, right from your apartment.
Bre Jenkins · August 4th, 2020

Mindfulness Neuroscientist Sam Harris Reports on His ‘Heroic Dose’ of Mushrooms
Harris has openly spoke about how LSD and mushrooms were "indispensable tools" in his growth as a person. "Without them I might never have discovered that there was an inner landscape of mind worth exploring."
Reilly Capps · January 20th, 2020
Load more posts